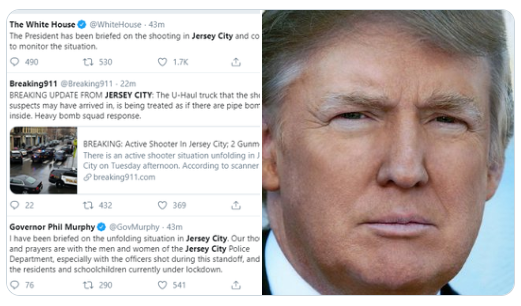 JERSEY CITY, N.J. – Six individuals including a police officer are reportedly dead in a Jersey City shootout Tuesday, one which is attracting international attention and coverage.

The situation on the ground is still developing. All Jersey City schools were placed in lockdown mode as the shooting unfolded. The FBI and ATF are reportedly involved and President Donald Trump has been briefed on the shooting.

According to The Associated Press:

“White House spokesman Hogan Gidley said President Donald Trump had been briefed on the shooting and was monitoring it.

Loud volleys of gunfire could be heard at regular intervals but subsided around 2 p.m. in the city, which is just across the Hudson River from Manhattan.

Video images show a line of police officers armed with weapons pointed in several directions walking down the sidewalk. The Bureau of Alcohol, Tobacco, Firearms and Explosives said it was responding.”

Update in the #JerseyCity shooting: One police officer is dead and three other officers injured.

#FBI is on scene in Jersey City. The public is asked to stay away from the area of MLK Drive near the light rail station as well as Bay View cemetery. Your cooperation is appreciated.

The President has been briefed on the shooting in Jersey City and continues to monitor the situation.

Today is a horrific day. Officers have come under attack and we have several wounded. Our hearts are heavy and the violence is not over.