How does the NJGOP select its candidates? 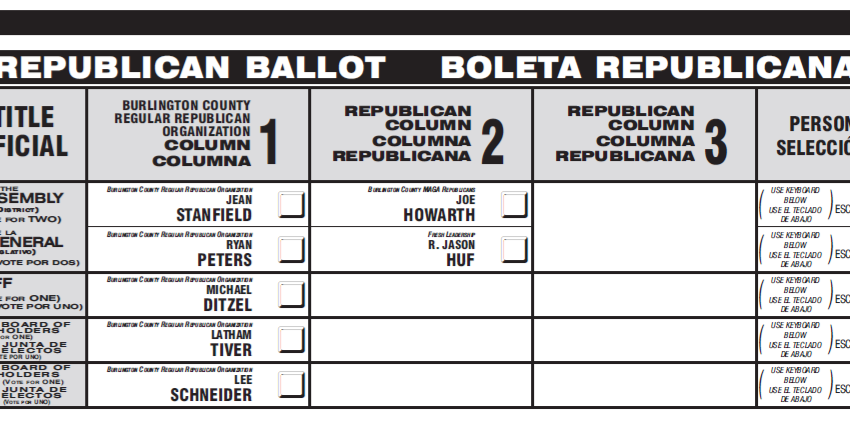 I’ve been fielding a ton of questions in recent days (in light of the fluid U.S. Senate nomination contest) concerning HOW the New Jersey Republican Party selects its candidates. Unsurprisingly, a lot of you don’t know how the process works. Misinformation abounds! That’s a problem. Knowledge is power, right?

A brief explanation is in order.

First, candidates do their thing. They file with the FEC or ELEC (depending upon whether it’s a federal or state election). Call local party committee members. Hold launch events. Set up a social media presence. All the campaign-y type things you need to do to be taken seriously as a candidate for office.

Secondly, sometime between the holidays and early spring, each of the 21 counties independently decides who gets its official “line” for the June primary ballot. Many counties (like Monmouth and Bergen) hold conventions of county committee members, local Republicans who are elected to represent their respective communities on the county party committee. The candidates campaign for committee members’ support (much like a mini version of the Iowa caucus or New Hampshire primary) and make speeches at the convention and preceding local club meetings. Others (like Camden and Warren) permit their duly-elected party chairmen to consult the executive committee and make selections. Middlesex County’s GOP hosts an “open” convention where county Republicans can register – for a small fee – and participate. Some counties have screening subcommittees which assess candidate eligibility or make recommendations to the committee as a whole. Salem County doesn’t have a proper “line” at all.

Why is this process so important?

Check out this sample Republican primary ballot (from a Burlington County LD8 suburb, circa 2019) posted below:

As you can see, Jean Stanfied and Ryan Peters landed primo ballot position in the “official” column with the official county party slogan. The local candidates are “bracketed” with them in the same column.

Joe Howarth (who lost his party’s support after allegedly attempting to join the Democrat Party) ended up out in no man’s land with a fellow unendorsed candidate. This ballot is actually tame by the way; sometimes, candidates who aren’t endorsed can find themselves a few or even several columns to the right of ballot.

If Stanfield and Peters were running this June 2020? Donald Trump would be at the top of their column. That’s a powerful advantage. The reason is simple: many voters aren’t going to scrutinize or even notice candidates who aren’t in the official column or especially the Trump column. They’re going to vote Team GOP, or Team MAGA, and then bounce from the booth to get on with their day.

Third, the county party informs the county clerk via formal correspondence of its bracketing decisions.

Finally, all registered Republicans have the opportunity to head to the polls on the first Tuesday in June to vote.

The actual NJGOP state organization (headed by Doug Steinhardt) is influential but plays no formal role in the primary selection process, nor do Republican state senators, congressmen, or freeholders. The county GOP chairmen are sovereign (think the “Articles of Confederation”), and their committee members make the actual endorsement decisions.

It may surprise you to know that many of New Jersey’s 21 counties have dozens of vacant county committee seats.

If you don’t like who the party is putting up to run in June? And subsequently November? It may have less to do with a vast conspiracy and more to do with an unfortunate lack of participation by many keyboard warriors who could easily get off their tails and into the decision-making process if they actually tried. Bitching, as is so often the case, of course, is much, much easier.