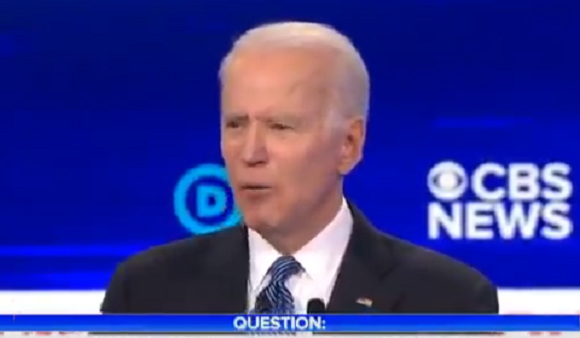 I’m sure you found a better way to spend your Mardis Gras 2020 than watching a Democrat Debate, Save Jerseyans, but you missed a real shit show. Yelling. Interrupting. Gesticulating. If alien invaders showed up mid-debate? They would’ve been creeped out by their strange encounter with the third kind: socialists.

The night’s highlight (for me anyway) was when Uncle Joe Biden emphatically declared that “150 million people have been killed since 2007 when Bernie voted to exempt the gun manufacturers from liability. More than all the wars, including Vietnam, from that point on.”

According to Joe Biden, half the entire US population has been killed in the past 13 years:

This #DemDebate is something wild pic.twitter.com/kNa8YNzAjM

FYI: The population of the United States is just about 330 million.

For those of you who learned math in an NJEA-run Abbott District, Biden apparently believes the equivalent of about half that number have been killed by gun-slinging assailants. Were that true, America’s most populous urban centers would probably be riddled with ghost neighborhoods. Entire suburbs would be vacant. Post-apocalyptic stuff.

The truly amazing thing? Uncle Joe (77) is only four years older than Donald Trump (73) but continuous to act like he’s 40 years older than the incumbent he says he’s best prepared to replace. Think about that the next time someone tells you the Donald is “an orange oaf” or whatever other over-recycled insult they can come up with.