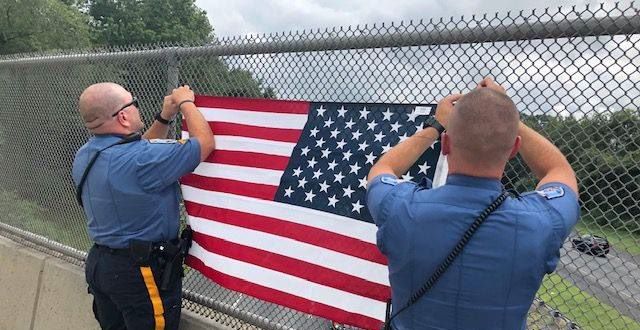 ROBBINSVILLE TOWNSHIP, N.J. – It’s one of those “what the hell is going on in this state” kind of situations, Save Jerseyans.

Outrage was building online over Labor Day Weekend after word got out that the N.J. Turnpike Authority – which recently approved a massive toll hike without physical public participation – had decided to rip down the state’s iconic overpass American flags. The Robbinsville PBA is fighting back; they’re hosting an event on Friday (the 19th Anniversary of 9/11) to replace the flags.

Here’s the full statement (and a pretty good explanation of what’s going on) from Local #344 President Michael Slininger:

Last month, Robbinsville P.B.A. Local 344 purchased over a dozen American flags to replace those that were either missing or tattered on the overpasses covering the New Jersey Turnpike and I-195. The amount of support we received via social media and throughout town was incredible, and our post reached nearly 8,000 viewers. The reason we decided to replace the flags was to continue the tradition of honoring our veterans and those lost in service for our country. American flags have been flown on overpasses throughout the state and throughout the nation since 9/11.

Now, as we approach the anniversary of that horrific day, we are extremely disappointed to announce that the NJ Turnpike Authority saw fit to remove all flags on overpasses covering the N.J.T.P. last week, replacing them with signs citing N.J.A.C. 19:9-1.13. This is a code which is meant to apply to advertisement material or improper road signage. We cannot understand why the N.J.T.P.A. has suddenly decided to abandon a tradition of patriotism and respect for our veterans. It is not known what happened to the brand new flags that we put up, but we truly hope they were respectfully disposed of, if not displayed elsewhere.
The flags that we placed on the overpasses were firmly secured, and it was the P.B.A.’s full intention to continue maintaining them, to ensure proper respect was given. They did not impede traffic and did not obstruct visibility for passing motorists. The placement of the flags was done in the same manner that has been done for nearly twenty years.

I have written to the Director of Relations at the N.J.T.P.A. and hope to have a reason for the unexplained action soon. If any share in our disappointment at the removal of the flags, please feel free to write/call their office (info@njta.com / (732)750-5300).

We hope this matter is resolved soon, and we will continue to fly the American flag proudly. Have a great Labor Day.