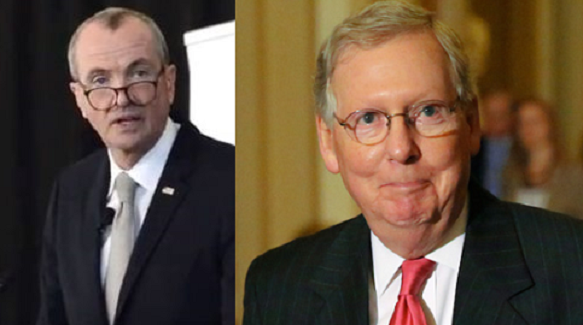 You probably missed it last Friday as you prepared for a long weekend, Save Jerseyans, but Governor Murphy served up yet another denunciation of Mitch McConnell for refusing to sign off on a blue state bailout. You’ve heard it all before.

“I need to once again call out Senate Republican Leader Mitch McConnell for his — I don’t know if it’s unwillingness or unreasonableness –stalling on providing any direction assistance to states in the next federal coronavirus aid bill being negotiated, or not being negotiated, as the case may be,” said Murphy at his daily COVID-19 propaganda broadcast. “Senator McConnell, if you’re watching, this is not about politics. It’s about the survival of the programs that millions of Americans, including in your home state of Kentucky, are relying upon for their survival.”

That’s just not true. Not by a mile!

Unfortunately for Murphy, his routine is getting harder to believe with each passing day. Last month at his second FY 2021 budget address, Murphy proposed $4 billion in borrowing and a 15% spending increase over three years. A historically large pension payment is part of the plan. One of his other spending proposals: a scheme to give $1,000 to 3 out of 4 New Jersey babies starting next year. Is that the sort of thing a responsible governor does when he’s poor enough to “need” a federal bailout?

Note that the money he’s borrowing isn’t exclusively dedicated to COVID-19 purposes either.

Of course not. I said it back in the spring: this bailout push is political. It’s an attempt by Murphy to pay back his public sector union buddies by avoiding state worker layoffs with federal cash. He also like ragging on McConnell in a blue state because it’s good base politics.

McConnell was nevertheless absolutely right to call bullshit on this nonesense.

And what’s more, the numbers have gotten WORSE for Phil from the time he first started crying for free cash. The latest math out of Trenton doesn’t support Murphy’s contention that we need a bailout. We recently found out that New Jersey cash collections from July 2019 through July 2020 were down only about $200M, from $35.118B to $34.919B. Remember: Murphy went to court to protect Democrat legislation permitting him to borrow $10 billion! And he’s now borrowing $4 billion.

You can keep saying it until the cows come home, Phil, but it won’t change the numbers.