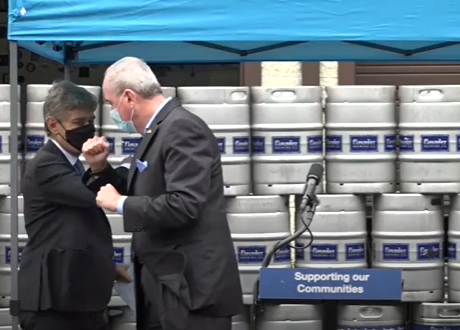 TRENTON, N.J. – The timeline is damning, Save Jerseyans.

New Jersey received $2.4 billion from the Coronavirus Aid, Relief, and Economic Security (CARES) Act back in April. Since then? Governor Phil Murphy has sat on our pile of federal cash like Scrooge McDuck. He announced the release of $60 million at an Evesham presser featuring Democrat Congressman Andy Kim (who faces a tough reelection fight in NJ-03 this year) and another $100 million today, in Hillsborough, alongside Democrat Congressman Tom Malinowski (locked in a pitched battle of his own with Tom Kean Jr. in NJ-07).

New Jersey is stuck in a cycle of sluggish economic growth and double-digit unemployment. It’s bad out there. You know.

To the surprise of no one actually paying attention, Garden State local governments and businesses can’t get the help they need unless a Democrat Congressman in their backyard is facing a tough reelection battle. In that case? Murphy will come and throw you some crumbs.

Republicans rightly laid into Murphy on Tuesday as the presser was in progress.

“Tom Malinowski takes to twitter on a near daily basis to rail against Republicans for more COVID relief,” said Kean in a statement. “Meanwhile, right here in New Jersey, Governor Murphy has been sitting on $2 Billion dollars for 200 days and he has not had the courage to pipe up and call for the release of that funding once.”

“Phil Murphy has been watching New Jersey drown while he uses our life preserver as a hoola hoop,” added NJGOP Chairman Doug Steinhardt in a separate statement. “It’s inconceivable that Murphy sat on this relief for this long while New Jerseyans drowned. We deserve answers.”

Keep all of this in mind the next time a Democrat friend accuses Republicans of “playing politics” with ACB or mail-in ballots or whatever else is a hot topic at the time. Murphy’s behavior is always poor but this is egregious partisanship at a time when New Jerseyans are suffering.
–