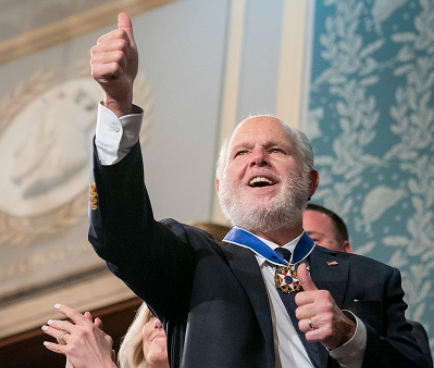 Having lived a uniquely successful and impactful life, the late, great Rush Limbaugh still has a lot to teach his countrymen, Save Jerseyans. Teaching is what he did every single day on his radio program that last for over three decades.

The most important pedagogical legacy of Rush in the context of our current politics might be engagement.

Americans are more connected than ever by technology, but we’ve learned (the hard way) that this interconnectivity is an illusion. It’s a paradox; in becoming more attached to one another, we’ve found it easier to isolate ourselves from people and ideas that we don’t like. Watch The Social Dilemma if you haven’t already. It details how Big Tech is exploiting us and dividing us for profit.

Rush’s national radio run began in the 80s many years before Facebook and, thankfully for posterity, he didn’t have a “mute” or “block” button to hide behind as a trailblazer for the new media and contemporary conservatism. His 1991 interview with 60 Minutes and 1992 appearance on Phil Donahue’s program stand as enduring examples of the importance of leaving your bunker and engaging people who think you’re wrong – or perhaps even nuts or “dangerous” – in the quest to win the hearts and minds of the American people. He fought censorship (including the former “Fairness Doctrine”) and efforts to “cancel” him (before “Cancel Culture” was even a thing, most infamously following the Sandra Fluke segment) and yet won because he wouldn’t allow anyone else to define him or his mission.

It’s a lesson which Rush’s Republican Party supporters were often happy to celebrate but unable or unwilling to put into practice themselves. It takes courage few possess.

I think the best example of Rush the Engager remains far less cited than those earlier clashes with mainstream media culture.

On June 1, 2020, Rush joined The Breakfast Club (America’s most listened-to black radio program) for an interview. The appearance occurred only a few days after the death of George Floyd, and Rush kicked things off by sharing his profound disgust over Floyd’s murder. What followed was a frank and at times heated exchange over race relations in the United States and Rush’s profound belief that America is a place where anyone can succeed if they want to succeed. He also put the Democrat Party on trial for its historic failure to return results in exchange for the loyalty of black voters:

Most Republicans weren’t willing to have these kinds of discussions before Rush. Many still aren’t willing or able to initiate this sort of dialogue. Rush did it because he was smart, talented, and above all else passionate about America and the success of Americans. He poked fun at a lot of people who deserved to be ribbed because it got you to pay attention, it was fun, and yeah, most of the time they deserved it.

Ultimately? He fundamentally gave a damn about everyone who WANTED America to succeed regardless of race, background, color or creed. In a very real way he was the least bigoted major figure in modern American politics. His only true litmus tests were (1) how hard you were willing to work and (2) how sincerely you believed in America’s ability to reward your hard work just as it had rewarded him. Rush wasn’t new to the scene, but his meritocratic was continually refreshing at a time when the purveyors of identity politics – politicians, tech overlords, the media, entertainers, “educators,” etc. – constantly labor to keep everyone segregated and angry.

We can’t retreat into our corners and change anything.

We need to talk about what we believe, but talking does not good if you’re only preaching to the choir. Rush went out and literally built a movement by challenging people who previously knew nothing other than voting for Democrats (perhaps at least until Reagan) to think differently. He couldn’t have done it using today’s tactics.

Learn from Rush, folks, and follow his example. It’s more critical now than ever.