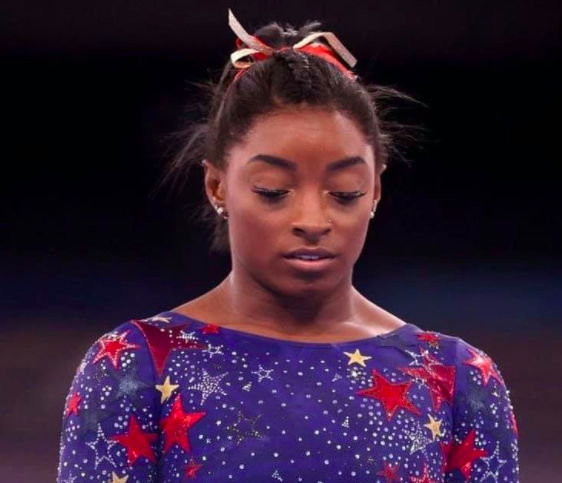 You already know unless you’ve been living under rock: pint-sized gymanstic superstar Simone Biles opted out of the Olympic all-around competition this week and, because EVERYTHING in our current media culture is a cause for consternation and controversy, the Internet freaked-the-fudge out.

50% of the Internet accused her of being a craven wimp. The other 50% insisted she was a post-modern heroine for acknowledging her fragility.

Both opinions are wrong, Save Jerseyans. Or at least only half right.

CNN’s Elle Reeve (who apparently spent some years as a gymnast) penned a piece explaining “the twisties” – which is what Biles is apparently grappling with – and what it means when you’re a competition gymnast:

“[Biles] said in morning practice that she had a little bit of the twisties. The twisties are a mysterious phenomenon — suddenly a gymnast is no longer able to do a twisting skill she’s done thousands of times before. Your body just won’t cooperate, your brain loses track of where you are in the air. You find out where the ground is when you slam into it.”

Yikes. Now, I’m not suggesting “twisties” isn’t a real thing. I can’t twist in the air and wouldn’t want to try. I am saying that the talking class may be overcomplicating Biles’s plight.

At 24-years-old, Biles has spent most of her life training at the highest level in a pressure cooker environment. She ate, slept, dreamed, and lived floor routines, balance beams, steady rings, etc. The immense task of endlessly preparing for Olympic competition is exhausting physically and mentally. She’s probably just burned out and… choked. It happens to people who’ve worked half as hard every day, in every industry, all over the world!

If you’re still not following me, then here’s a small sample of the ridiculously fawning coverage over the past couple of days:

Yes, it’s gotten THAT stupid out there.

Biles’s bio is beyond compelling. She’s overcome many obstacles in her personal life and chosen career. Conquering those circumstances to win four gold medals is unambiguously heroic, and no one can or should ever take that away from her. This latest (and last?) chapter doesn’t wash the rest, but it’s not the part we want other young athletes to emulate. America’s snowflakey, self-obsessed, over-medicated youth culture is a hot mess. They need role models who keep calm and carry on. Playing and succeeding through adversity is the embodiment of the classic Olympic spirit and a lesson young Americans need to internalize.

Soldiers who don’t jump on live grenades to save their comrades aren’t ipso facto cowards, but we don’t hand out Congressional Medals of Honor for not doing so.

See what I mean?

I suspect Biles will now be bigger-than-ever as a “self care” advocate. She’ll go on talk shows, appear on podcasts, and ramp up her social media well-beyond the end of the games when olympians usually go quiet and return to the gym. The “hard” choice here would’ve been to compete. Gold medal or not, her path ahead in the current cultural environment is now paved gold.

Don’t mock Biles who’s done great things and might still in the future. That’d be wrong, just like it’d be wrong to glorify quitting because it checks a box or feeds a narrative. Quitting, however, isn’t a great thing. Let’s be kind. Let’s be sensible. Let’s also resist the creeping urge to lower our high standards in the name of a comfortable, fashinable festishization of mediocrity and fragility.