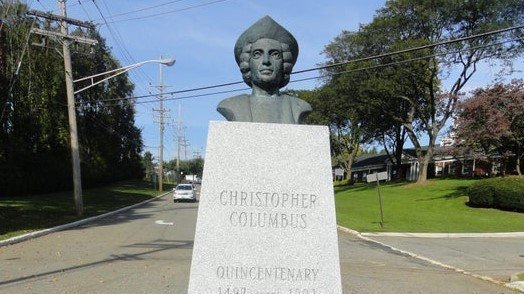 This is just history, folks. You don’t have to like the fact, but you can’t make up your own!

We’ve seen the usual anti-Columbus Day woke craziness playing out in New Jersey this year (most recently in Randolph). Across the Delaware in Philadelphia, there’s an ongoing court battle over the box which the city erected around a statute of the famous Italian explorer.

“The City is grateful that the Commonwealth Court took the time to review this important matter tonight. Earlier today, the City of Philadelphia filed an Emergency Application to reinstate the stay and preserve the status quo-the box protecting the statue.

Just now, the Commonwealth Court reinstated the stay and overturned the Court of Common Pleas order from earlier today.

No action will be taken with respect to the statue at this time. Removing the plywood covering during this holiday weekend would pose a serious public safety risk.”

Well, I’ve got rough news for the wokesters out there, and it’s going to come as a brutal shock: if you’re opposed to Columbus Day? You’re siding with white supremacists and the KKK.

h/t to Jennifer Braceras who wrote this gem for National Review back in October 2017:

“Here, in the United States, the anti-Columbus movement was sparked by white supremacists nearly 100 years ago. In the 1920s, the Ku Klux Klan promoted negative characterizations of Columbus in order to vilify Catholics and immigrants, many of whom celebrated Columbus not only as a source of ethnic and religious pride but also as a symbol of the free and diverse society that resulted from the European presence here. The Klan tried to prevent the erection of monuments to the Great Navigator, burned crosses in opposition to efforts to honor him, and argued that commemorations of his voyage were part of a papal plot. Rather than honor a Catholic explorer from the Mediterranean, Klansmen proposed honoring the Norseman Leif Eriksson as discoverer of the New World and a symbol of white pride.”

“Rather than honor a Catholic explorer from the Mediterranean, Klansmen proposed honoring the Norseman Leif Eriksson as discoverer of the New World and a symbol of white pride.”

My only recommendation, Save Jerseyans, is not to stand too close to your liberal friend/co-workers/whoever when you share this post. There head will explode! And I don’t want you to be harmed in the blast and blame me.