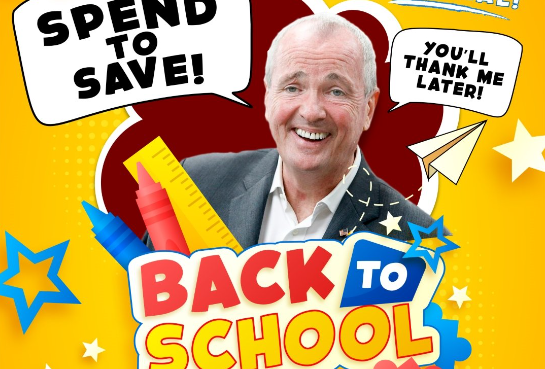 Governor Murphy’s lame “ANCHOR” rebate plan failed to capture the public’s imagination, Save Jerseyans, so on Wednesday, the top Democrat and his legislative allies went back to the drawing board and rolled out a new thoroughly underwhelming proposal:

According to the Murphy Administration’s official press release, the holiday would cover “(1) school supplies, such as pens and pencils, notebooks, and binders; (2) school art supplies, such as paints and paintbrushes, clay, and glazes; (3) school instructional materials, such as reference books, reference maps, globes, textbooks, and workbooks; (4) computers; and (5) school computer supplies, such as computer storage equipment, printers, and personal digital assistants.”

“This tax holiday for school products may not make kids look forward to school more, but it certainly will make parents happier when shopping for the goods they need to get their children in advance of the new school year,” said Senate President Nicholas Scutari.

It’s a cute line from Scutari, but as the NJGOP pointed out after today’s announcement, saving 7-cents on a gluestick is unlikely to rescue inflation-battered Garden State families who were already barely scraping by BEFORE gasoline prices hit record highs.

NJ suffers under crippling inflation & gas prices, and the highest taxes in the U.S.

Meanwhile, New Jersey Republicans have a comprehensive tax reform package on the table – not just a one time hit – that makes Murphy’s sales tax scam look almost comical in comparison.

The Assembly GOP estimates you’d need to purchase 104,000 Ticonderoga pencils between August 27th and September 5th ($26,000 worth of pencils!) to get the same level of benefit afforded by the Republican proposal:

Good grief! Under Governor Murphy's latest sales tax holiday on school supplies, you would have to spend nearly $26,000 – the equivalent of 104,000 Ticonderoga #2 pencils – to get the same relief as the GOP plan to adjust income tax brackets. pic.twitter.com/5qhTTGFMXP

That’s math anyone can understand, Save Jerseyans, regardless of how you performed in school!