The Only Race Lewis Will Run is On a Track, So Says Guadagno

Well Save Jerseyans, our latest poll showed that 78% of Save Jersey readers (the most important constituency in the state no doubt) thought that Lt. Governor Kim Guadagno should toss Carl Lewis off the ballot in the 8th Legislative District for a failure to meet the residency requirement for New Jersey Senate under the state constitution. And that is exactly what she did. 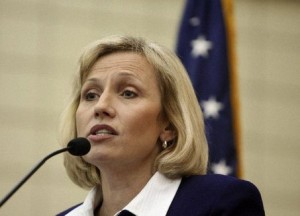 Democrats will cry politics at this decision, but really the requirement reads quite clear. A person must be a resident of the state for 4 years before being allowed to run for senate, and must be a resident of that district as well. Lewis has lived in California for as long as anyone can remember now, and his sudden move and even more sudden voter registration in Medford cannot change that.

I am sure that this saga is not over. Expect to see the Democrats back in court over this issue. They already failed to make the case that the residency requirements are unconstitutional during the first part of this legal battle, who knows how they will fair next time. Oh wait, I do. It wont work in the appellate division either.

Looks like the Democrats should start looking for a new candidate in LD8 and thank such a high profile singer/athlete/movie star for being a great place holder.

“We are gratified that the Secretary of State and her legal counsel took the time to review all the facts and agreed with our position that Mr. Lewis does not meet the 4-year residency requirement to be a candidate for New Jersey State Senate. Mr. Lewis himself admitted under oath that he was a registered and active voter in California as recently as 2009; that he didn’t file his income taxes in New Jersey, and that he only registered vote in this state on the day he announced his candidacy.

Based on those facts alone, it shows how desperate the Democrats were for a candidate that they would be willing to so quickly jump on Mr. Lewis’ baggage-filled, bandwagon without vetting him first. Today’s decision (Page 3) clearly states that “the right to run for office is not unlimited,” even for carpetbaggers like Carl Lewis who believe that their celebrity can trump everything, including the law.”

1 thought on “The Only Race Lewis Will Run is On a Track, So Says Guadagno”