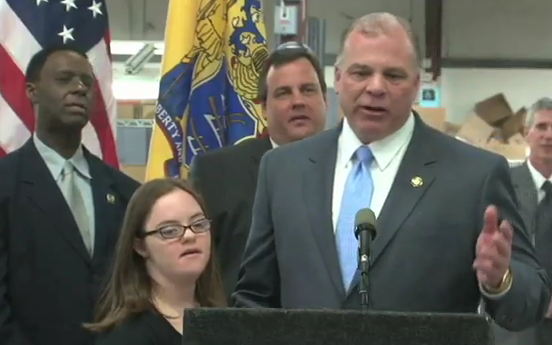 Also present was Senator Sweeney’s young daughter, Lauren, who was born with Down Syndrome.

Senator and daughter were there that day to watch Christie sign S-825/A-2038, legislation designed to protect persons with disabilities from abusive caregivers. Understandably, Sweeney got pretty emotional while delivering his highly-personal remarks; I’ve already fast-forwarded to the 2:29 mark to ease your viewing:

I can’t tell you how grateful I am that Governor Christie came here today to sign this bill. You know you’re going to hear a lot of rhetoric… and you hear a lot of rhetoric back ‘n’ forth. The Governor is a good man, and his heart is in the right place and he cares. So I want to thank him for what he did… it means a lot to me… thank you…. (crying)”

I don’t think Senator Sweeney wasn’t moved enough, Save Jerseyans. He’s right back to taking nasty swipes at the Governor, often for the silliest reasons. Remember when he called Christie a “bully” and a “punk” for “tricking” him into pension reform? Talk about an emasculating admission! Now he’s released a snarky statement regarding Christie’s trip to Cali:

Meanwhile, the hundreds of thousands of New Jersey residents who are still looking for work will just sit back and wait for the governor to grace us with his presence in the state he was elected to lead.  No rush governor.  We have waited over 20 months for you to present some sort of economic plan.  What’s another couple of days?”

Make up your mind: Chris Christie is either a heartless human wretch or a fundamentally decent man. You can’t have it both ways and preserve your credibility, too.

And do you really expect us to forget which party controlled Trenton absolutely from January 2002 until January 2010? You talk about waiting for “20 months;” the rest of us have been waiting 8 years for your ultra-liberal, anti-taxpayer caucus to extract its collective head from the sand. It took Chris Christie’s arrival in Trenton to finally get things moving, so please do me a favor and shelve any future lectures on Democrat “plans” or the Governor’s alleged lack thereof. Your rhetoric rings hollow.

Good grief, folks! No wonder God tried to give Sweeney an “electrifying” attitude adjustment a few months back: