An interesting poll from Fairleigh Dickinson/PublicMind came down today, Save Jerseyans.

It seems that although Bob Menendez has been the United States Senator from New Jersey for nearly an entire six year term, nearly half of New Jersey voters have never heard of him.

That’s right. 47% of all New Jersey voters have never heard of Senator Menendez and literally have no opinion of him. This includes 49% of New Jersey Democrat voters. Within the 53% that has heard of him, 23% of voters have a negative opinion. But that’s not all. 71% of New Jersey voters believe that our country, you know, the country that has been run by Democrats in the Senate and White House for years now, is on the absolute wrong track.

In case you happen to be one of the 47%, the picture above is Bob Menendez, your Senator who stands with President Obama on every single one of his failed economic policies that may have cost you your job, your 401-K, or your sanity. And the answer to your next question is “no.” I have no idea what he is pointing at either. 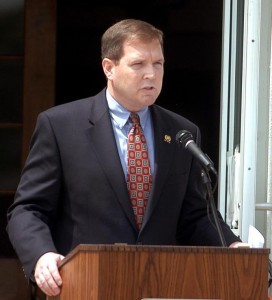 It also turns out that 92% of New Jersey voters have never heard of, nor have an opinion of, the only other (basically) declared candidates in the race: State Senators Joe Kyrillos and Mike Doherty.

So what does this all mean?

This means that Menedez is vulnerable and the GOP contenders can only go up. When 92% of voters have no idea who you are, that basically means the only people who have heard of you are those who:

As soon as the 2011 elections are over in our state, the GOP candidates need to get out there and contrast themselves with Washington as much as humanly possible while simultaneously tying Menendez to the DC status quo. If Menendez = Washington, and Washington = “Wrong Track” for 71% of voters, then it would be a no brainer, that negative opinion rating should skyrocket. Simple Math. Kyrillos and Doherty have the opportunity to build their images from a blank slate. They can highlight their respective strengths and achievements with no major blemishes in their respective histories that have ever been bad enough to make 92% of the state care.

Menendez, on the other hand, is still riding the Obama-train while it continues to head completely off the tracks.