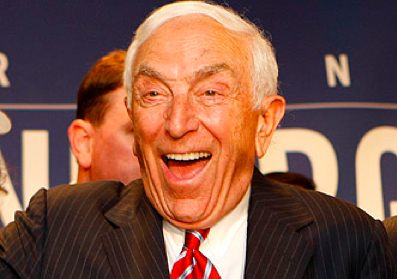 3,000 year old U.S.  Senator Frank Lautenberg has been slipping into senility for years now, Save Jerseyans.

Anecdotal evidence: I observed him in the flesh a few weeks ago at New Jersey’s ‘Empty Sky’ 9/11 Memorial dedication. Our Senior Senator arrived at the very last minute, seemed a bit disoriented, fumbled through his “prepared” written remarks and proceeded to struggle through his speech. Everyone in my row was stunned out of their somber mediation by his distressingly poor performance. He did start yelling at the end; no doubt a single remaining functioning  synapse fired and, for one moment in time, the Laut recovered his old irascible form.

But moments of coherence and eloquence are few and far between as the Senator’s 88th birthday rapidly approaches. And he’s saying increasingly crazy things… like accusing Governor Christie of ABUSING WOMEN on Friday evening’s Hardball with Chris Matthews:

Loretta Weinberg’s feigned outrage over “the bat” incident has been widely covered right here on the blog. Just another futile Democrat attempt to land a punch on Governor Christie.

However, in this particular case, I’m not even sure the Laut knows what he said. It’s that bad. The only remedy for this mess is immediate retirement before he embarrasses himself and the state again!