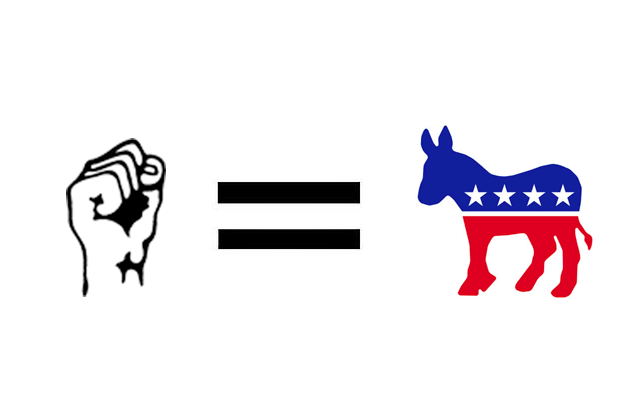 Save Jersey will gladly contribute blankets, hemp rope necklaces, incense burners, Phish CDs, or whatever else the ‘Occupy’ Wall Streeters need to transport their disheveled comrades to the 2012 Democrat National Convention in Charlotte, NC next August.

It will be 1968 all over again. And we all know how that election turned out for the Democrats.

I invoke ‘1968’ deliberately because it’s the same folks now that were pushing an identical agenda back then. Almost without exception, “occupiers” are NOT middle class IT technicians, mid-level managers, skilled laborers, small business owners and parent-professionals from Main Street, USA. They are not the “99%” as has been alleged on affiliated web blogs. Au contraire! Occupiers are aging hippies, college students, violent anarchists and union activists, all of whom have comprised the national Democrat coalition since the South bolted during the Nixon Era.

Check out this revealing excerpt from the ‘Occupy New Jersey’ Facebook page: 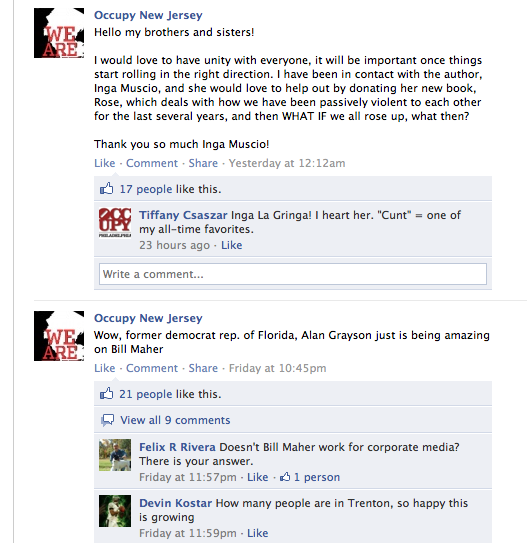 Inga Muscio is a self-described feminist who wrote a book titled Autobiography of a Blue-Eyed Devil: My Life and Times in a Racist Imperialist Society. Uh huh. And Alan Grayson? He’s the guy who accused Republicans opposed to Obamacare of wanting sick people to DIE on the House floor. Hence, the reason he’s a “former” congressman.

Is any of this evidence of a nonpartisan, “open-minded” movement, Save Jerseyans?

Need more proof? Examine the elements lining up behind them. Nancy Pelosi, one of the ultra-liberal architects of our current economic predicament, came out last week and enthusiastically endorsed the occupy movement. The same radical labor and teachers unions who tried to occupy Wisconsin’s state house have openly joined MoveOn.org to artificially swell the protesters’ ranks. Susan Sarandon, Michael Moore, and Hollywood’s usual socialist suspects are on the ground to fire up the crowds.

And unlike the conservative tea party movement, where tens of thousands of average taxpayers engaged political activism for the first time, the ‘occupy’ folks are recycled liberal activists espousing traditional far left objectives: redistributivist government implemented through Alinky-style tactics instead of democratically-cast ballots. They even tried to storm the Smithsonian over the weekend! No respect for anything.

But then as now, liberal temper tantrums are certain to backfire. The more they march, curse, spit, complain, trash free market values, condemn their country’s institutions and demand equality of outcome at the expense of opportunity for all, then the less opportunity there will be for their Democrat sympathizers to stave off electoral disaster next November.

This movement is liberalism’s ugly morning face without the benefit of cosmetics, Save Jerseyans. Ironically, for all the whining about “corporate greed,” these protesters exude greed and every related vice in their pursuit of “free” college tuition and other handouts at someone else’s expense. John and Jane Independent are bound to recoil and head in the opposite direction.