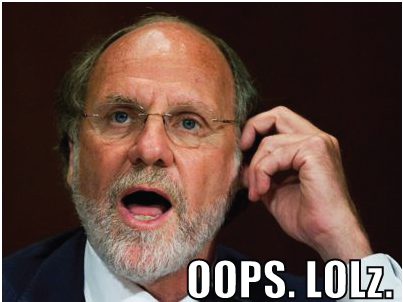 A rather large group of farmers from Montana are taking our former Governor to task in a class action law suit centered around the $1.2 billion that Corzine allegedly lost when MF Global went under last fall.

The suit includes  38,000 farmers who placed millions in the care of MF Global and Mr. Corzine, but found that the firm was allegedly using their (along with many other’s) money to take care of corporate debts that stemmed from poor investment choices in the Eurozone.

You know, that continent across the Atlantic Ocean that has been in a financial crisis for far longer than the United States and has been viewed as an ultra risky endeavor for even longer?

According to the plaintiffs, although their money was recklessly “lost” in this scandal, they are not the only victims (they just happen to be the ones who can sue). The farmers claim that their crops will be affected by this loss and the American people will feel that pain in soaring food prices.

So thanks again, Governor Corzine.

Not only have you managed to plunge the state of New Jersey into a horrid, fiscal mess before you left office, but now you are spreading your record of failure to the rest of the country, and perhaps the world, by striking at our wallets one more time.