U.S. Senate candidate Joe Kyrillos echoed the sentiments of his ally, Mitt Romney, in a press release today attacking incumbent Bob Menendez (D-NJ) for an act of omission. Specifically, the junior senator’s failure to speak out against President Obama’s assault on the Roman Catholic Church. 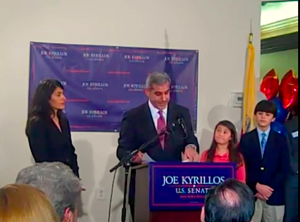 This is a shocking assault on the religious freedom upon which this nation was built. Bob Menendez’s silence is deafening. He loudly supported Obama Care and has remained silent in the face of this attack on religious liberty. The Obama/Menendez mandate is an affront not justto one particular faith, but to all Americans who seek to practice their faiths free from government intrusion.”

“President Obama has been systematically trampling upon Americans’ basic personal freedoms since his first day in office.  Now he is after our religious freedom and I strongly urge him to reverse course.  It is sad and unfortunate that, even as many Democrats have spoken out against this provision, Senator Menendez has stood by Obama’s side while the religious freedom of the people of New Jersey is under siege.”

“Freedom of religion is one of our nation’s most basic First Principles and unlike Senator Menendez, I cannot sit idly by while President Obama dismantles our Constitution one freedom at a time.”

Menendez is another “cafeteria Roman Catholic,” Save Jerseyans. His NARAL rating is 100%. Not surprising, since most liberal Democrat politicians happily put their party’s agenda ahead of their morals. Hence, the reason why Kyrillos will continue to try to make inroads with the state’s heavily Democratic but socially conservative Hispanic population.

The exact state of this race remains unclear. According to the latest public polling out today, Menendez’s reelect numbers remain weak (i.e. well below 50%). That said, the President is back above 50% statewide. That later number will probably tell us more than any other data heading into November regarding Kyrillos’s chances of an upset.

19 thoughts on “Kyrillos Goes After Menendez On Religious Liberty”