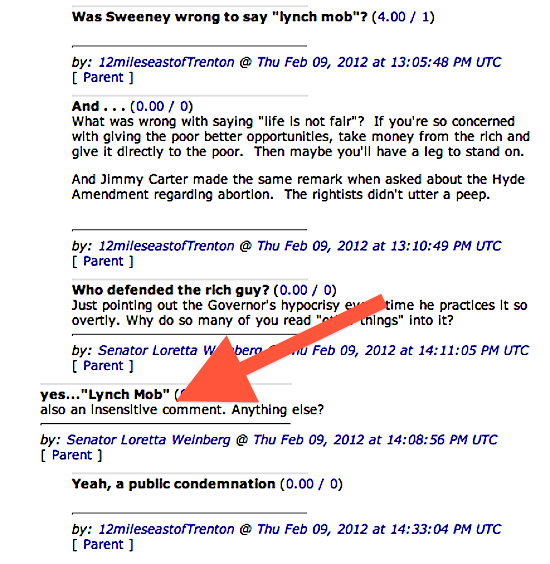 Her lame point? That Mr. Giordano’s critics should condemn Mr. Romney, too, for his often-misquoted “poor/rich people” comments. Whatever… it’s her prerogative to be wrong!

But then a clever blog commenter asked Senator Weinberg: are you also willing to condemn a fellow Democrat, Steve Sweeney, for his own stupid remarks? Here’s what she said:

It’s obvious enough that Loretta wanted NOTHING to do with that question, Save Jerseyans!

It would, however, be nice to see a little consistency from Democrat legislators for change. Their outrage is typically selective, a fact which leads a skeptical conservative like me to conclude that liberals don’t really believe all of this political correctness nonesense either! I doubt Senator Sweeney meant to offend anyone on the basis of race, but if it’s offensive for Republicans to say, shouldn’t the same rule then apply to powerful Democrats? How about a press release, statement or presser to that effect?

I’d be glad if Senator Weinberg proved me wrong on this. Then she’d just be “wrong,” and not also a giant hypocrite to boot.