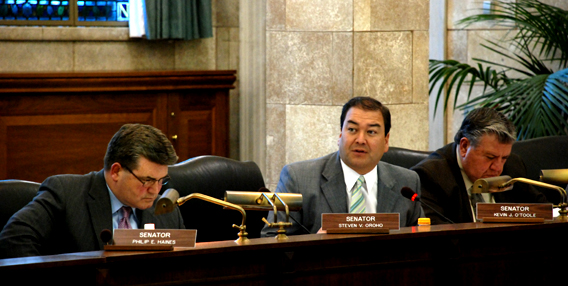 The appointment of Justices to the Supreme Court of New Jersey is one of the most important duties afforded to the Governor under our Constitution.

The men and women called to serve as members of our State’s highest judicial body must grapple with the most significant disputes arising from laws in a variety of areas, ranging from criminal justice to corporate governance. Rightfully, the qualifications of any attorney nominated to sit on the Supreme Court should be carefully scrutinized.

In the case of Governor Christie’s two recent nominees, Bruce Harris and Phillip Kwon, that study reveals the backgrounds of extremely well qualified candidates whose experience is entirely consistent with the past and present Justices of the Supreme Court, all of whom enjoyed swift and strong Senatorial support…

Phillip Kwon has admirably dedicated nearly his entire career to various positions in public service within New Jersey. Agraduate of Georgetown University and Rutgers Law School, Mr. Kwon has worked over the last decade for the State’s Attorney General and the UnitedStates Attorney’s Office as the lead trial prosecutor in matters such as narcotics trafficking, gang violence, and public corruption. He has served with distinction as a manager of dozens of federal prosecutors and thousands of state attorneys, earning the accolades of colleagues and adversaries. As both a private attorney and a judicial law clerk, he has experience in the same variety of civil matters that will occupy the Supreme Court’s docket in the years to come.

Mr. Harris has achieved the rare distinction ofcombining a successful career as an attorney at two of the State’s most prestigious private firms, with nearly eight years of elected publicservice. A magna cum lade graduate of Amherst College, Mr. Harris also holds an M.B.A, with honors, from Boston University and a law degree from Yale. In legal practice that spanned nearly two decades, Mr. Harris personally negotiated a wide array of financial transactions, in both the public and privatesector, valued in excess of $8 billion. His legal advice and representation ranged from matters involving environmental projects, healthcare facilities, and public libraries, to assisted living homes, nonprofits,and residences for the disabled. Simultaneously, Mr. Harris volunteered his time with a host of local charities, including the Chatham Environmental Commission, the Chatham Historic Preservation Commission, and as a Trustee of the Foundation of the UMDNJ and New Jersey Health Foundation. He also combined his legal practice with nearly eight years of elected service, first as a member of the Chatham Borough Council and now as Chatham’s Mayor.

Notably, the backgrounds of both of these candidates are highly similar to the experiences and qualifications of our current and past Justices, all of whom received quick approval by theLegislature. Like Justice LaVecchia, who was confirmed within four days, Mr. Kwon is a graduate of Rutgers Law School. Mr. Harris not only has alegal degree, but also holds a Masters in Business Administration, which he obtained in 1979. Similar to Justice Rabner, who was confirmed within 17 days, Mr. Kwon clerked in the U.S. District Court, and held leadership positions in the Office of the United States Attorney. Both Justices Rabner and Patterson garnered experience at the Office of the Attorney General, as has Mr. Kwon, who has been with the Office since 2010. Three of the five current justices have extensive legal experience in private practice, as do both Mr. Harris and Mr. Kwon. Like all members of the court, Mr. Harris and Mr. Kwon have worked in prominent New Jersey law firms. Nor will Mr. Harris become the first elected Mayor and Councilman to sit on the Court, as Justice Daniel O’Hern served as both Mayor and Councilman of Red Bank before his service as a Justice.

Moreover, the confirmation of both Mr. Harrisand Mr. Kwon will restore much-needed political balance to the high court. By unwritten rule, Governors have maintained a political partyaffiliation split on the New Jersey Supreme Court, with no more than four Justices of the Governor’s party serving at the same time. Since 1947, however, the implementation of that “tradition” has produced a Republican majority a mere five times compared with nineteen Democratic majorities. Governor Christie’s appointments will honor the real intent of the compromise by creating a true party balance comprised of three registered Republicans (Hoens, Patterson, Harris), two registered Democrats(Rabner, Albin), and two unaffiliated Justices (LaVecchia, Kwon).

The Constitution does not permit indefinite, or even lengthy, vacancies on the Supreme Court. While the power of appointment and re-appointment restssolely with the Governor, the Senate holds the privilege of providing advice and consent of all persons asked to serve the people as members of the Court. The Governor’s selection of these two exceptionally qualified candidates, whose backgrounds are substantially similar to the attorneys who have served our State with distinction, will allow the Senate to move swiftly to publicly consider the temperament of these nominees in fulfillment of our Constitutional duty.