To say the banquet hall was crowded is an understatement; it was absolutely packed! I had to park a block down the street since the venue parking lot was overflowing with cars (and some jerk double parked).

The room itself was filled with a wide variety of Republicans. You had your establishment types along with grass root activists and conservative leaders. Notably sitting up front was Chris Christie’s father who was visibly very proud to see Joe make this historic announcement. 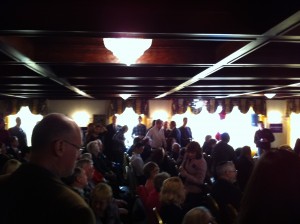 A packed crowd for Senator Kyrillos.

The challenge: unseating the Washington insider Bob Menendez. As of his last FEC filing on September 30, 2011, Menendez had approximately $7 million on hand. He should be releasing his FEC filings for the last quarter of 2011 very soon, and I’m sure that $7 million kitty has grown. 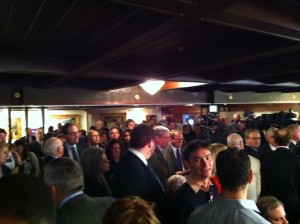 There is a primary Joe Kyrillos has to win first. He is facing former tea party darling Anna Little whose many former supporters were at the Lincroft Inn for Joe’s historic announcement. However, Anna was underestimated once before and that allowed Anna to overcome her primary opponent at the time, Diane Gooch.

In addition to Little there is Joseph Rullo a businessman (Today’s Solar Energy Company) from Toms River. Rullo was the first candidate to actually file besides Ian Linker who withdrew from the race several months ago. Rullo’s campaign manager, Stacey Chait, worked on Chris Christie’s campaign organizing student groups across the state in a massive student volunteer effort. Rullo will announce his Senate run with the media on February 24, 2012 at the Quality Inn on Route 37 East in Toms River at 8:00pm

One thing is certain: this race has just begun and the fun will soon start… Jersey style, that is!

Exclusive video from the event can be found below…