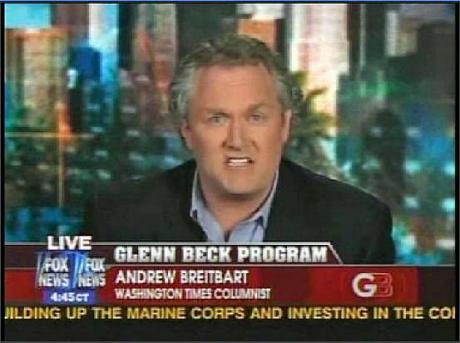 Since I moved in DC two years ago, I’ve had the honor to meet some great conservative activists, leaders, writers, and thinkers. But when I was sitting on a conference call at 9am this morning, checking Twitter, I saw news that is truly shocking. Breitbart. Dead.

This was a man who possessed energy and life that frankly only a few human beings ever truly possess. No one will ever forget his occupation of the Weiner press conference and his work to undo ACORN, the NEA, and countless progressive and socialist institutions.

He gave voice to a fellow New Jerseyean named James O’Keefe and made him a star.

He gave voice to this very website when we ran with our story on the bogus robocalls during the 2009 gubernatorial election.

He was outspoken but unpretentious, and even shared a drink or two with this writer who was absolutely star struck swapping stories with a new media behemoth. At a bar. In Minneapolis.

Andrew Breitbart wasn’t a conservative thought leader per se; he was a conservative media leader who redefined the way the Right fights the Left. He got down and dirty and  loved pissing people off. Because he knew that the Left for the past 30 years had enjoyed free reign – and exercised a level of irresponsibility and destruction – that absolutely needed to be picked apart and laid bare to regular Americans.

He helped bring two great websites into the fold and created new standards for journalism at the dawn of the 21st Century. By helping Matt Drudge make The Drudge Report THE place you HAD to go to check for news, he broke down the gates of the mainstream media and showed that the American people were thirsty for truth and that the Fourth Estate would soon be replaced by the Fifth Estate – the blogosphere.

He co-created The Huffington Post, which is today one of the largest websites and is massively important to the Left in pushing their message.

He then created the “Big”s – Big Hollywood, Big Government, Big Journalism, and Big Peace. These sites broke great news stories and have given bloggers from across the web the ability to be heard by millions of fellow conservatives.

He recently was working on documenting the Occupy movement, which truly was the fruition of the progressive activist base. While Occupy has slowed down over the winter, Breitbart was working with his team to show the world who Occupy really was.

I’ve met and worked with some of his team – they are bright, courageous, driven individuals who have faced their own personal conversions and I know they will keep up the good fight. But it’s the rest of us on the blogosphere and on the Right that need to carry his torch as well.

Matt Rooney and Brian McGovern do a great job of that right here at Save Jersey. I’ve watched this site grow from a tiny online journal when Matt started writing back in May 2008 into a nationally-respected source for conservative news, commentary and analysis on all-things New Jersey (and Chris Christie).

We need to remember most of all everything that Andrew stood for and believed in – the belief that everyone deserves a voice and that the truth must be set free. We can’t be scared of fighting for what we believe in – the Left will use lies, distortion, abuse of the law, and defamation to take us down. We need to work and fight harder than the Left and we need to use technology and truth to stop them. It is an uphill climb, we have many enemies and we will sometimes fall down. But we must keep fighting.