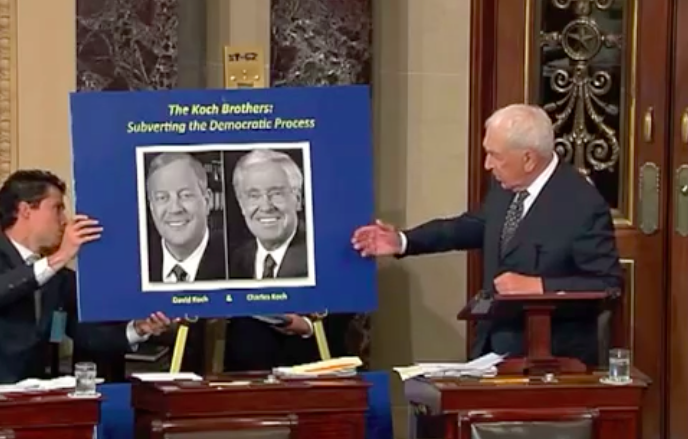 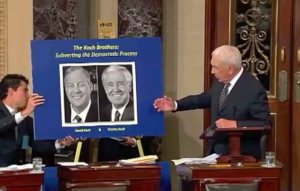 My least favorite fossil took to the fabled Senate floor on Monday, Save Jerseyans, and you’ll be happy to know U.S. Senator Frank Lautenberg (D-NJ) managed to croak out something easily on par with his other exceptionally absurd accusations from over the years.

He never disappoints! That’s why we love the Laut here at Save Jersey. Always good for a story.

This particular rant wasn’t isolated idiocy but, rather, part of a coordinated Democrat offensive against the legendary Koch Brothers, billionaire financiers of conservative causes including the relentless Americans for Prosperity organization.

Lautenberg and his Democrat cronies used the Koch example to push the very-undemocratic DISCLOSE Act (which subsequently failed to get passed a GOP filibuster), a measure more appropriately termed the “selective disclosure” act for how it blatantly favors labor union political giving over corporate donations and seeks to intimidate legitimate expressions of First Amendment freedoms. But who is really surprised by that? Democrats derive most of their electoral money and manpower from unions. They’d love to shut down businessmen like the Koch Brothers while simultaneously preserving the right of Big Labor to turnout Democrat voters.

As always, the Laut got a little overly excited, took it too far and accused the Koch Brothers of trying to “manipulate the election,” called for a boycott of Koch Industries, Inc. products and announced his suspicion that the Koch Brothers really desired to… restore a monarchy? What?

Video below the fold…

Isn’t there medication for this kind of behavior, Save Jerseyans? Frank can afford it… he’s rich as all hell, and he certainly isn’t at Obamacare’s mercy like his constituents (members of Congress have great health care on our dime). It’s already saved his life once.

Koch Industries, Inc. fired back at the Laut & Co. over at its website, KochFacts.com:

Sen. Lautenberg made his comments in support of the DISCLOSE Act, which is the Democrats’ latest effort to intimidate and harass their political opponents.  Sen. Lautenberg’s attacks are just the latest in the ongoing orchestrated campaign against Koch by the Obama administration, the Democratic party, and its allies, who oppose the Kochs’ longstanding 50-plus year advocacy for individual liberty, limited government, and economic freedom. Democratic Senators Durbin, Stabenow, and Whitehouse made similar disparaging remarks, joining in the Democrats’ coordinated attack on Koch.  Koch companies have operations and employees in Senators Durbin’s and Stabenow’s home states.  As has been documented, (here, here, here, here,here, and here) Koch and its owners have been subjected to an ongoing series of political attacks designed to intimidate them and silence their exercise of their First Amendment rights of free expression. Some commentators have stated that President Obama has employed an enemies list, similar to that of President Nixon.  Sen. Lautenberg’s comments are unfortunate, wrong, and especially troubling and ironic given that he claims he was placed on President Nixon’s enemies list for financial support of a political opponent of Mr. Nixon.

We urge Sen. Lautenberg and his Democratic colleagues to cease their irresponsible and reckless attacks against Koch, its 50,000 U.S. employees, Charles Koch, and David Koch, and instead focus their efforts on promoting policies that will stimulate real, sustainable economic growth and freedom.

Lautenberg isn’t courageous, and he has absolutely no business calling the Koch Brothers cowards. It’s easy to hurl accusations from the Senate floor hiding behind the legal protections afforded to legislative speech.

Spending your OWN money to back up your political principles? And incurring the public derision of demagogues like Lautenberg as a result? Men and women who threaten to use government’s coercive powers to shut you down and ruin your business? Now that’s a real profile in courage, Save Jerseyans. Glad to see the Koch folks have no intention of backing down!

4 thoughts on “The Laut Goes After Koch Brothers On Capitol Hill, Calling Them… Monarchists? (VIDEO)”