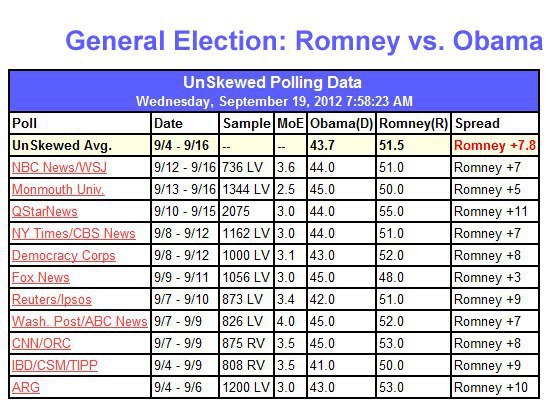 Here’s an interesting chart from Examiner.com, Save Jerseyans.

Go ahead and contrast it with the latest RCP average of presidential election national polls.

Does anything jump out at you?

Look… I’m not suggesting that Mitt Romney is really up 7.8% nationally. Anything is possible, but that would also mean Mitt Romney’s campaign is on track to best Barack Obama’s 7.2-point margin of victory in 2008 when conditions for his political party were near-perfect. I don’t think Republicans can expect to do quite that well in 2012.

I am, however, determined to keep all Save Jerseyans from fretting over public polls utilizing turnout models which we believe are fundamentally flawed. Very flawed. Whether Obama is up 3-4 points right now or Mitt is leading 7-8 points nationwide depends entirely on “who shows up” on November 6th.

Stay calm and carry on…