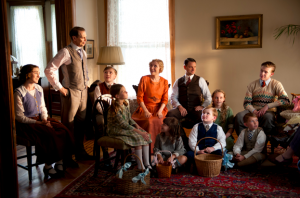 The real Boardwalk Empire is under siege by violent, merciless Hurricane Sandy the “Frankenstorm” this morning, Save Jerseyans.

But on the fictionalized Boardwalk Empire, last night’s episode “Sunday Best” treated viewers to a much more tranquil scene. Four separate Easter dinners. Each very different and, of course, aiding in the development of this season’s macro-plots.

An all-out mob war still might be around the corner.

For now, however, the most aggressive encounters are happening over the turkey drumsticks and cranberry sauce. Who can’t relate to that? Well, at least until the end of the episode.

Spoilers below the fold…

Could this plot get any more bizarre? Doubtful. Gillian invites Jimmy’s look-alike over for a one-on-one Easter at her plush (but unprofitable) Atlantic City brothel. At first, building off of last week, viewers think Gillian is indulging her sick  incestuous impulses. Not quite… she needs a body to settle Jimmy’s estate and keep herself afloat financially. Gillian invites her suitor into a marble jacuzzi (20’s style), injects this poor veteran in the bathtub with a super-dose of heroine and drowns him. She then puts Jimmy’s dog tags around his neck to complete the ruse. What a lady…

For the first time in a long time, the Thompson brothers sat down together — along with their families — for a big ‘ole Easter dinner at Eli’s house. It’s a little awkward at first, of course. The kids get along great and enjoy an Easter egg hunt. But Eli can’t help broaching the topic of his “demotion,” and Margaret can’t avoid discussing her sham marriage with her long-lost (and somewhat deluded) sister-in-law. All’s well that ends well when Nucky calls a visibly touched Eli later in the evening to thank him for dinner — and promote him to co-manager of the primary liquor warehouse with Mickey Doyle. Nucky has less luck mending fences with his increasingly bitter wife, Margaret, who rebuffs a flirtatious invitation to spend the night.

Gyp is having issues. Even beyond his well-documented ones. We learn during a private conversation with his top lieutenant that he’s losing territory to Arnold Rothstein’s organization since his power play in Tabor Heights went bad. Their conversation is interrupted by a woman — presumably his tough-as-nails mama — who guilts him (and his associate) to the kitchen table. But the combustible Rosetti isn’t any more relaxed for having had dinner with family. He heads to a church to pray (if screaming threats at God qualifies as praying) and ends up assaulting a priest before robbing the church. As if his day wasn’t rocky enough, his boss Masseria decides to whack him at the end of a meeting for causing too many problems. Rosetti manages to talk his way out of it… by promising to wipe out Rothstein and Nucky.

The series’ most likable character continues to pursue his crush on the comely daughter (Julia) of a severely-depressed war veteran Paul Sagorsky. Richard joins them and other vets for dinner along with Jimmy Darmody’s son, Tommy. Dinner is unsettled by Sargosky’s abrasive behavior but goes well enough until he catches Tommy playing with his deceased son’s toys. Paul Sagorsky flips out on Tommy, a move which inevitably draws the ire of a protective Richard. Richard uses the opportunity to invite an upset Julia out with him and Tommy for a stroll on the boardwalk. It’s a start…