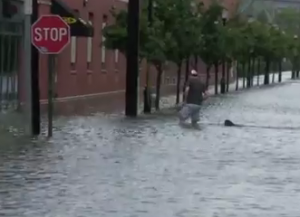 My home of Hoboken is on the road to recovery, Save Jerseyans.

Almost all of the “Mile Square City” is back to humming with the sweet sounds of electricity and I recently received a PATH Alert email stating that the PATH train line has had partial service restored.

Although things are on their way back to normal, there are still many without heat, electricity, or even homes across NJ and NYC and our prayers are with them.

During the blackout, the people of Hoboken were out and about sharing soup, hamburgers, hot dogs, and even electricity. Residents who never blacked out (living on the two streets that by the good fortune of bad government, and are on different electrical grids from the rest of town) put out extension cords and power strips so those without could charge their phones and stay in touch with loved ones.

My building was without electricity or heat from Monday night until this past Saturday so I availed myself of these neighborhood good Samaritans. There were some fairly cold nights spent under 10 blankets but I had no choice but to tough it out (as my parents had no heat or electricity as well so what would be the point in attempting to go to them?). It wasn’t scary by comparison to the events of Monday night and what we all experienced as Hurricane Sandy arrived in Hoboken….

Needless to say, it began with a dark and stormy night. The usually tame and mild Hudson River, high tide ridding in and egged on by the luminescent full moon was awash with anger as ocean water, whipped in a furious stampede over 13 feet high, crashed into both the north and south sides of Hoboken.

At around 8:20 p.m., I looked out my window to see a growing puddle in the street below; it aroused no worries. Going into the living room and chatting with my roommates and friendx we discussed how little rain the storm was bringing. One roommate, a transplant from Miami said (understandably at that point) that it wasn’t a real hurricane. Little did we realize the street outside was becoming an ever growing tributary of the Hudson. Hearing some voices, we opened the large window and saw people outside taking pictures as the water started to rise. We realized the garage which was on the ground floor would flood and that my friend who was visiting from the other side of the building would not be able to get her belongings for much longer so we high-tailed it down the stairs and across the garage. Water wasn’t yet coming in from the street but the drains in the garage floor were gurgling up water…the drainage system was overflowing.

Across the garage and up five flights of stairs, while my friend gathered her things, I looked out the window and saw a beautiful urban waterfall of fast water filling up a construction site about one story below ground. Next to the site and in front of her side of the building, the street was rapidly filling with water. We quickly gathered her things and raced back to my apartment on the other side of the building; there was at least a few inches of water already in the garage.

About a half an hour later the fire alarm went off in the building. There was no fire and no smoke, at least at first. The residents gathered in the court yard which being on the second flood and between both sides of the buildings was above the water and shielded from most of the wind. My friend and I were outside, my roommates where inside. Someone said there was a fire and I went back in to make sure my roommates got the heck out of dodge. The stairwell closest to my apartment (actually it opens up right next to my front door) was filled with thick black smoke. As I opened the door to leave the stairwell my roommates came bursting through. Two of my friends and other solid citizens and good neighbors had been banging on everyone’s doors to alert them to the fire. My roommates went down the stairs and down the hall to the yard, I went into the apartment to grab my go-bag (you should always have one). I went back outside and for a solid half hour, with the river running 4-5 feet around my apartment building and the smell of gasoline and smoke, it was a bit unnerving to say the least.

The lights went out. No fire trucks came and how could they? Cars had been washed down the street and were blocking the road like artificial reefs.

Eventually one of the supers from the building management came and informed us that somehow the thick black smoke was coming form the car batteries and was not in fact an apartment fire (I’m not a car person and don’t understand this but everyone lived so I’m happy). This sated no ones worries or concerns, however, and though the smoke did dissipate its smell and that of gasoline lingered. People, nervous to go back inside, stayed in the court yard or in the hall right off it. It was chilly and one of my roommates and my friend wrapped themselves in blankets from my go-bag (you really should have one). We stayed in the hall with the door propped open going back into the court yard periodically to see the raging waters. Eventually we went back in doors, using flashlight as the emergency lights did not last long, and went to bed.

The flooding in Hoboken has been in the news non-stop but my area was almost empty of water by Tuesday morning. Though with a sever cold and no voice whatsoever, I walked around my neighborhood only to charge my phone and get food (from the two stores on one of the few powered streets). In doing so, I witnessed many random acts of kindness from communal bbq’s of defrosting freezer foods (we did two in my building’s court yard), to strangers inviting each other in for tea, and others bringing extra water and blankets to the shelters.

No recovery is perfect and I’m sure we will all hear of bad organization and planning in the coming weeks, but what I witnessed in Hoboken (aside from the actual storm surge) was of kindness, caring, and community.