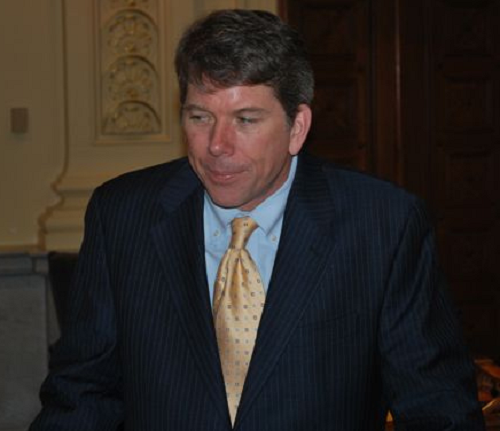 In my efforts to introduce candidates to the voting public I started a weekly column called Meet the Candidates. In essence it is a past day stump speech updated for the virtual world.

For this week’s column I am honored to introduce to you Assemblyman Sean Kean. Assemblyman Kean represents the 30th Legislative District.

He was born on May 21, 1963. Attended Seton Hall University for his B.A. in Political Science, Columbia University for his M.A.L.S. in American Studies and then went on the get his JD from Seton Hall University School of Law. Assemblyman Kean served on the New Jersey General Assembly since 2002 before he was elected to the Senate in 2007. After the Legislative Redistricting he returned to the Assembly in 2012. He currently serves on the Financial Institutions and Insurance and Law and Public Safety Committees.

My interview with the Assemblyman is below the fold, Save Jerseyans:

Sanders: What do you feel are your greatest legislative or personal accomplishments thus far?

Assemblyman Kean: Voting against over 120 new taxes during the first ten years I spent in the Legislature.

Sanders: If your constituents wanted to reach out to you and ask you questions about your positions or how to volunteer, who can they reach out to?

Assemblyman Kean: We currently do not have a campaign office.

I would definitely encourage constituents to call my legislative office at 732-974-0400. I am always willing to discuss my positions with constituents or answer any questions. I try to be readily available to constituents whether I meet with them, call them back, email, or send them a written response. If someone would like to volunteer in my district office, they should call 732-974-0400 and ask for Kate.

Sanders: There has been a lot of concern about FEMA requiring residents along the shore to raise their houses according to the new flood maps. Do you think this is fair to impose upon homeowners and if so do you think public funding should be made available to help them accomplish such a task?

Assemblyman Kean: The Advisory Base Flood Elevation (ABFE) maps designed by FEMA are a major concern in Monmouth and Ocean Counties. Many of our municipalities were devastated by Sandy. I have been contacted by many homeowners who are very upset about the new maps and new zone designations.

These maps were designed to provide the best elevations to protect lives and property in another major flooding event. While I agree with the idea of rebuilding stronger and protecting against the next storm, we need to balance those preventative measures against overdoing it and essentially pricing many people out of their homes.

I have written to Craig Fugate, Administrator of FEMA, expressing my concern about the maps and urging FEMA to work with affected municipalities to ensure that the maps accurately reflect flood risk. I also let him know how devastating these maps could be to homeowners in Legislative District 30.

I am hopeful that FEMA will work with the municipalities to ensure that the Base Flood Elevation maps accurately reflect flooding risk and do not unnecessarily add to the burden faced by property owners.

I think it is fair to ask homeowners to take reasonable precautions in order to protect their lives and homes. In certain cases, I do think that public funding should be made available to help people comply with the maps.

Sanders: What’s your position on New Jersey’s courts legislating from the bench on issues including the Council on Affordable Housing (COAH) and Abbott Districts?

Assemblyman Kean: I firmly believe that the courts have no business legislating from the bench. The Council on Affordable Housing and the Abbott decisions have ultimately wasted billions of taxpayer dollars and have not rectified or improved affordable housing or low-income school districts.

COAH has been a detriment to municipalities and property taxpayers since it was established. For example, Wall Township is required to build 700 affordable units and Howell Township is required to build over 1,000 affordable units. Not only are its requirements excessive, but will result in explosive growth and costs while wreaking havoc on the environment. This is a matter that will have far reaching implications on towns and taxpayers.

For nearly three decades the Court has legislated from the bench on Abbott erroneously mandating the state pour billions of taxpayer dollars into urban, low income school districts on the premise those schools would produce better educated students. It’s a theory that has failed and has not helped these students.

Sanders: What are your feelings in regard to increasing the minimum wage to $8.25 an hour? Do you think it is fair for businesses which are already hurting in this economy to be made to pay their employees more?

Assemblyman Kean: I did not think 2013 is the best time to be considering increasing minimum wage to $8.25 per hour. I truly believe our economy is just starting to rebound and I am very hesitant to place this requirement on businesses right now. I have real concerns about asking employers to pay employees an increased minimum wage. This could cause some employers to say well, I can’t afford a new employee right now or even, I can’t afford the employees I have.

Sanders: In a short statement, please advise why your constituents should vote for you and what you want to accomplish in the next four years.

Assemblyman Kean: I believe that constituents should vote for me because I will do my best to represent the interests of Monmouth and Ocean Counties and fight to ensure that we rebuild after Sandy, reduce spending and waste in government, and promote policies and legislation that will help our economy grow and create jobs. In the next two years, I hope to see a shore economy that is thriving and doing even better than 2012, a reduction in the unemployment rate, and a state that is affordable for families.

If you are a candidate and interested in being a part of my weekly Meet the Candidates post, Save Jerseyans, please email me at nikisands3@hotmail.com.