Buono’s Hypocrisy by the Numbers 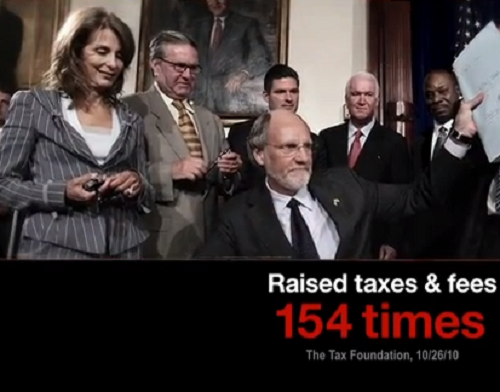 Yes, we have the highest taxes due to the last two previous administrations. Have you ever wondered why?

Barbara Buono can spin all she likes! Let’s take our time to examine how we got here, figure by figure, just in case there’s any confusion:

Corzine and McGreevey combined added over 154 tax increases. A budget that was in the toilet, the state was going broke, and Corzine was writing checks knowing the well was running dry. On July 15, 2006, the sales tax was raised from 6% to 7% that was supposed to fund our rebates and the following year there was no rebate. So we funded our own rebate and, the following year, there wasn’t any money as a result.

Tax and spend, spend and tax with Barbara Buono supporting the tax increases all along the way. Now she is running on a platform of. . . cutting taxes?

In July of 2009, Corzine boasted that “13,000 private sector jobs were added last month because of our business-friendly policies,” when in actuality the state lost 3,100 jobs in June of 2009. Jon Corzine claimed he created 13,000 jobs, but his actions after his inauguration proved that facts often speak differently than rhetoric. Faced with an unemployment toll that rose to 9.2 percent, the Corzine administration spin was that the loss of jobs in June was the smallest since the recession began. Yet there were thousands of unemployed who were already standing in line, long before Chris Christie was even thinking of running for Governor.

Corzine extended the 4% corporate tax surcharge and raised taxes by 25 % on liquor. His Lt. Governor pick, Loretta Weinberg, had voted for every tax increase that ex-Governor Jim McGreevey wished for and every tax increase that Jon Corzine proposed; she was never interested in cutting government expenditures or standing up to government unions. Instead, she has consistently supported ever-increasing government expansions.

With the beginning of the recession in December 2007, New Jersey already lost 150,100 jobs…

With the passing of a $29 billion budget, taxes increased by $1 billion while eliminating property-tax deductions for the wealthiest residents and shaveing billions from health care, higher education and other programs.

When New Jersey Treasurer David Rousseau was asked the question “In your observation, do you feel New Jerseyans are overtaxed?” Rousseau incredulously answered “No.”

Corzine condoned the state’s wasteful spending, the union pandering, giving public employees benefits the taxpayers can’t afford and refusing to take the necessary steps to end the hidden tax of public corruption even before the recession. Corzine broke his promise to cut property taxes by 40% over 4 years. His 2010 budget irrefutably increased property taxes another 20%.

Those tax increases destroyed New Jersey’s economic and business environment, having driven thousands of residents and businesses out of New Jersey and making our state one of the most unaffordable in which to live. It happened long before Chris Christie was elected and, not coincidentally, is a primary reason why Chris Christie is now governor.

In August 2009, Garden State foreclosures increased 30%. The average median household income in New Jersey dropped $7,214 between 2006 and 2008. The percentage of New Jersey residents subsisting below the federal poverty level was 9.2 percent and growing. The economy remained so poor that despite the claim of 13,000 ‘new’ jobs created by Governor Corzine, the people of New Jersey still lost over 12,000 jobs June 2009, and another 47,000 ran out of unemployment benefits by December 2009.

A combined total of eight years of taxes, fees, and regulations under McGreevey and Corzine not only chased many businesses out of New Jersey but also succeeded in chasing 100,000 residents to escape as well.

As of August 2009, when Jon Corzine was Governor:

• More than 230,000 people already had left New Jersey since 2002
• Property taxes, on average, had risen almost 55 percent statewide just from the prior seven years, and by 20 percent when Corzine took office.
• The budget increased taxes on payroll, income, cigarettes, alcohol, lottery winnings and increasing DMV fees, for a total of $1 billion.
• His budget did nothing to balance the following year’s obligations, and only went toward the prior year’s debt.

Unemployment increased by more than double from 4.8% to 9.7% during Corzine’s single term in office. His few newly created jobs didn’t even come close to paying the salaries and benefits of those jobs that had vanished. Teenagers, minorities, and less-educated workers were already losing out to employees who were still working but for less money. 1 in 20 people employed at that time lost their job. African American unemployment had risen to 13.6%, and Hispanic unemployment in the state had risen to 11.5%, above the state average of 9.7%. Indicators pointed to a weakening of the recession, taking several years for families who lost their homes and income to realize it is over, probably never again to achieve past levels.

Those figures demonstrated how New Jerseyans were losing their jobs and homes due to the failed policies instituted by the Corzine Administration that had been continued from the previous administration. Instead of making life more affordable, both administration’s had simply created more financial hardships for those trying to stay afloat.

Taxes increased for the citizens of New Jersey by over $10 billion dollars even in the face of a deteriorating economy.

Democrats voted in favor of a $400 million payroll tax hike; furthermore, they eliminated $100 million in property tax deductions, increased Real Estate Commission Fees by $68.9 million in, and supported an income tax increase to the tune of $903 million.

For over eight years, the people of New Jersey had seen their property taxes increase over 55%, their tax dollars wasted, jobs leaving our state and their property tax relief eliminated, but Jon Corzine and a Democratic controlled State Assembly never learned their lesson. They continued to do everything in their power to cement our state’s dubious honor of having the highest property taxes in the nation.

Tax upon tax, bill upon bill, regulation over regulation… a strategy that’s not conducive to growing New Jersey’s economy. Our recent history (which I’ve gone through above in painstaking detail) bears that out.

Governor Corzine’s answer on the campaign trail for inquisitive reporters and taxpayers? Pack up and move to North Dakota if they didn’t like it! Of course that’s not a solution at all, and for the majority of citizens in this state, relocating across the country wasn’t a realistic option.

It’s not hard to understand why tax rates were spiraling out of control. State spending and tax revenues climbed more than twice the rate of inflation from 1980 to 1990. State-government employment had outpaced population growth. The U.S. population grew in the 1980’s by 10 percent, and NJ state employment grew by almost 30 percent. For every dollar increase in compensation received by private-sector workers, state-government workers received $6.30.

Florio pledged to skip takes hikes but nevertheless shoved and ram-rodded through the legislature a “bilk the rich” $2.8-billion tax hike designed to bestow a massive infusion of funds to inner-city school districts. All this hike really accomplished is to immediately sink our state economy into a deeper recession. Business bankruptcies jumped by 150 percent, 300,000 jobs were lost, and the unemployment rate rocketed up to 9.1 percent–the highest in the nation at that time. Governor Florio declared that his tax hike was an unavoidable dose of bitter medicine to balance the budget. The truth of the matter is that Florio was among the three biggest spending governors in the nation. In 1991, the budget grew by 8.4 percent; that increase was followed by a 1992 budget expansion of 26.1 percent (the third largest in the nation). In his first two years in office, the budget grew by more than $3,000 per family.

In short, Florio made his own fiscal bed. We all had to lay in it!

Buono can’t ignore history this campaign cycle. Governor Christie won’t let her. Florio, McGreevy, and Corzine were governors who tried to fight budget deficits solely with major tax increases. Their lack of imagination and courage only served to further weaken the state’s economy and did little to put on cork on the flowing bottle of red ink.

Florio and Corzine lied when they said they wouldn’t raise taxes, and now a Democrat legislature full of alumni from those reckless years is doing whatever it can to force Christie to renege on his own promise of not raising taxes.

Had Corzine been serious about putting the state’s finances in order, he would have phased out the pension system, raised the retirement age for state employees to the same as their counterparts in the private sector (no retiring before the age of 62), stop the borrowing without voter approval, and eliminate the corporate business tax which would’ve allowed the business community some breathing room to grow again.

What did he do instead? Again, Corzine raised taxes over 55% on just about everything imaginable. The 1% sales tax increase did nothing to aid the taxpayers of this state; taking rebates away was insult to injury. He tried getting the taxpayers to vote for ½% dedicated strictly to property tax on the ballot, thereby ending any chance of property tax reform in the future. We know his history on dedicated funds, such as taking the $4 million from the EMT fund to balance the deficit. Corzine had proposed the closure of 9 state parks to save $4.5 million, then changed his mind and decided to build an $87 million park by using money from the Corporate Fund Tax.

Now, unbelievably, Barbara Buono and many of her Democrat colleagues want to point the finger at our current governor and ignore the mess that they created, one which Governor Christie inherited upon taking office on January 19, 2010.

Barbara BWOH’-noh needs to come up with a reason why she is going to be better for New Jersey. Inventing an alternative ‘tax and spend’ history than what we all know to be the truth (see above) won’t cut it at the ballot box this November.

10 thoughts on “Buono’s Hypocrisy by the Numbers”