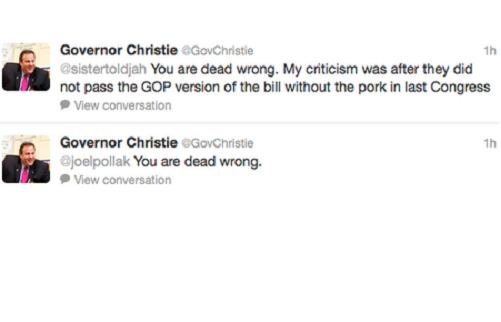 Conservative Pundits, Soured On Christie, Engage the Governor via Twitter Over Sandy Bill

The conservative bloggers in question accused Christie of rewriting history. They criticized Christie for going after his own party in Congress when they didn’t pass the pork laden bill quickly enough, instead pulling the bill from being voted on due to an excessive amount of “pork.” Christie disputed their account, saying he criticized Congress and supported the Relief Bill after the Pork was already stripped out.

One blogger for Townhall.com, Katie Pavlich, quickly wrote an article as the war was raging, and then proceeded to engage the Governor, which in turn called her, “Dead Wrong!” Even BreitBart’s Joel Pollak got in on the act.

Is the Governor of New Jersey right or wrong here? Read the Twitter exchanges cited above and decide for yourselves, Save Jerseyans.