Democrats Oppose Civil Service Changes Because They Could Lead to Corruption… IRONIC!?!? 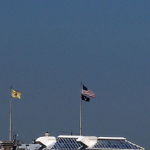 I’m not a fan of unions, Save Jerseyans, so I’m definitely interested in seeing how Governor Christie’s proposed changes to the state civil service system are going to play out.

The proposed changes make sense, in that banding together like jobs and eliminating the need to take examinations to proceed through the ranks will result in cost savings for residents. But of course, the Democrats don’t like us messing with their territory (because it is primarily their territory). And heaven forbid we save the taxpayers of New Jersey some of their hard-earned cash. Not on their watches; not if they can help it.

According to Hetty Rosenstein, the Communication Workers of America’s New Jersey director, Christie’s proposal “unfairly rigs the rules so those who buy influence or enjoy special connections can get ahead.” She continued on to say that discrimination against minorities would ensue and the public would be harmed by the changes.

Barbara Buono also weighed in on the governor’s plan as well, criticizing it for removing protection for workers to have equal opportunity for advancement, instead of being subjected to political pressure and possible corruption.

Aren’t these reactions kind of ironic, Save Jerseyans, since there is already so much corruption within our union-dominated state government anyway?

The very idea of a public service union irritates me to no end – government employees negotiating with other government employees, all wanting to increase their pay as much as possible at the expense of the taxpayers who foot the bill and have no voice at the negotiating table. The taxpayers also happen to be the unlucky ones who have everything to lose, since their welfare is threatened if the unions withhold public services as part of their negotiation tactics.

These types of dealings are inherently bad for taxpayers, and I very much doubt that eliminating examination scores as an indicator of performance would result in anything more unconscionable within the union ranks.