A Little Base “Outreach” 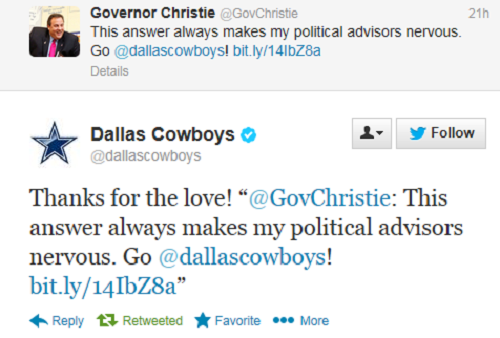 Since Chris Christie’s standing with Republicans outside New Jersey has suffered as of late, Save Jerseyans, the Governor’s team may be trying to begin the reconciliation process that will almost certainly kick into high gear after November.

Step 2: publicly re-declare his love for the Dallas Cowboys…

A RINO from the Northeast would never pull for a Texas team like the Cowboys, right? It’s great base politics, folks, effectively being the sports equivalent of Cristina Kirchner resurrecting the Falklands issue whenever the economy tanks. Sure, it makes this Eagles fan throw up a little bit in his mouth (I’m sure you Blue Men concur), but of all the troubles in the world this isn’t among the worst. I guess.

The Cowboys reciprocated by retweeting the Governor’s video: 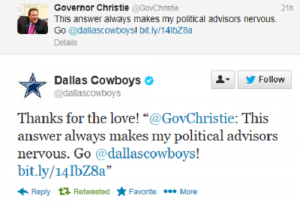 16 thoughts on “A Little Base “Outreach””