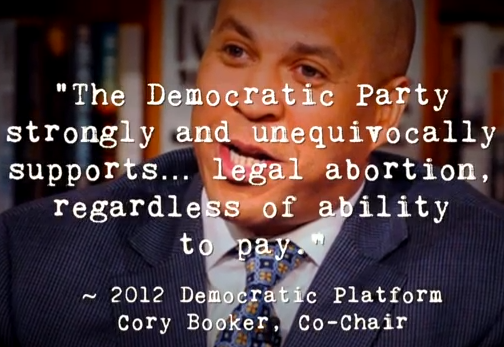 A leading national Pro-life organization is setting its sights on Cory Booker with a new web ad targeting his abortion record, Save Jerseyans.

The Susan B. Anthony List  has teamed up with the Super PAC behind BookerFail.com, the American Commitment Action Fund, to produce it:

Regular readers will recall that Cory Booker played a “major” role crafting the 2012 DNC Platform after being severely scolded earlier in the summer for exercising an independent thought. That platform raised eyebrows for being among the most pro-abortion in history.

While most polls show a majority or strong plurality of New Jerseyans supporting access to abortion, only a minority of adults support the practice without any restrictions. New Jersey had adopted its own partial birth abortion ban during Christie Whitman’s tenure before it was struck down by the 3rd Circuit Court of Appeals.

So you might say Booker is the real “extremist” or “radical” in this New Jersey Senate race, Save Jerseyans, at least on one issue…