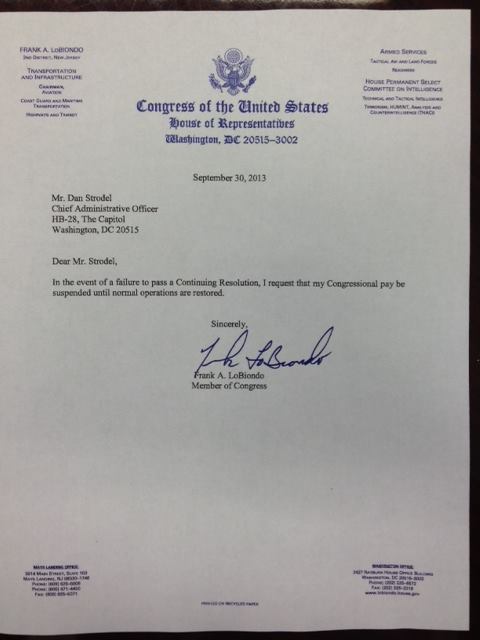 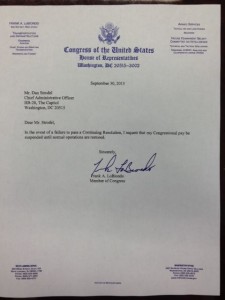 U.S. Rep. Frank LoBiondo (R-NJ02) isn’t a supporter of the President’s health care law, Save Jerseyans, but if both sides of the debate can’t reach a compromise by Midnight tonight, then Rep. LoBiondo has made up his mind:

South Jersey’s senior Republican congressman sent a letter (right) to the House’s chief administrative officer on Monday afternoon requesting a personal pay freeze in the event that a continuing resolution isn’t passed and continuing for as long as a government shutdown lasts.

The 27th Amendment specifically reads “[n]o law, varying the compensation for the services of the Senators and Representatives, shall take effect, until an election of Representatives shall have intervened.”

Some members of Congress have nevertheless echoed Rep. LoBiondo’s intention to voluntarily forgo their $174,000 salary for the duration of the shutdown.

If the House leadership is smart (I’m hoping for affirmative proof in the next few days), then each and every member of their caucus will follow Frank’s lead and make the announcement on the Capitol’s steps TONIGHT in front of the cameras for replay on Tuesday’s morning shows. They need to drive home the point concerning who’s really working for the American people and who’s just playing politics…