Paul to Endorse Lonegan in NJ 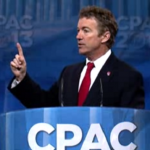 Paul told NRO.com that he was interested in helping Lonegan in his bid to beat Cory Booker late last month.

You’ll recall that Christie and Paul sparred in July over the NSA spying controversy, Paul’s libertarianism and Christie’s alleged RINOism.

Save Jersey has been told by a reliable source that Governor Christie does not plan to meet with Senator Paul during his visit. Try to contain your surprise…

4 thoughts on “Paul to Endorse Lonegan in NJ”