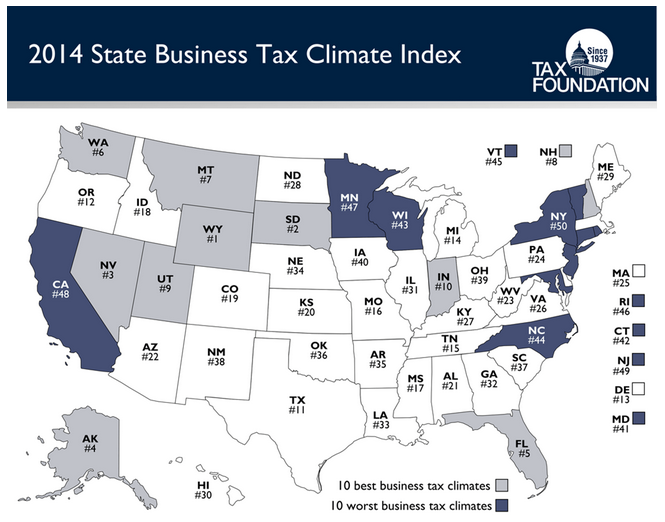 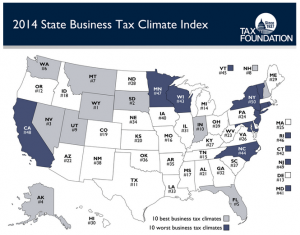 In its annual analysis of U.S. states’ business climates released on Wednesday, the D.C.-based Tax Foundation ranked each state utilizing an index that takes account of factors contributing to the cost of doing business.

There’s an undeniable pattern on the map to your right, Save Jerseyans. “The states in the bottom 10 suffer from the same afflictions: complex, non-neutral taxes with comparatively high rates,” concluded the Tax Foundation’s analysts…

Understatement of the century!

And the causation couldn’t be clearer if it smacked us in the face.

“The fact of the matter is this is the end result of more than decade of reckless fiscal policies from an ultra-left wing Legislature,” observed Daryn Iwicki. “AFP applauds Gov. Christie for working hard to free our job creators from Trenton’s heavy hand for the past four years. But the reality is there is only so much he can undo when he’s faced with a liberal majority in the Legislature that is beholden to the failing idea that if Trenton just taxes more and spends more of their hard-earned money things will get better.”

Time and time again, the Democrats have refused to adopt key initiatives which would help dig us out of the hole that they helped dig. He inherited a mess for which there is no fix capable of being accomplished by executive order. He continues to offer ideas while the Trenton Democrats reciprocate with what will be the costliest de facto business tax hike in New Jersey history.

November 5th is looming larger than ever. Without the partnership of a legislature that’s willing to put down its spears and pick up shovels, New Jersey is going to continue to lose businesses to neighboring states (like PA, ranked considerably better at 24%) and the resulting lost revenue will exacerbate Trenton’s spending-induced fiscal woes. Don’t say you weren’t warned… again…