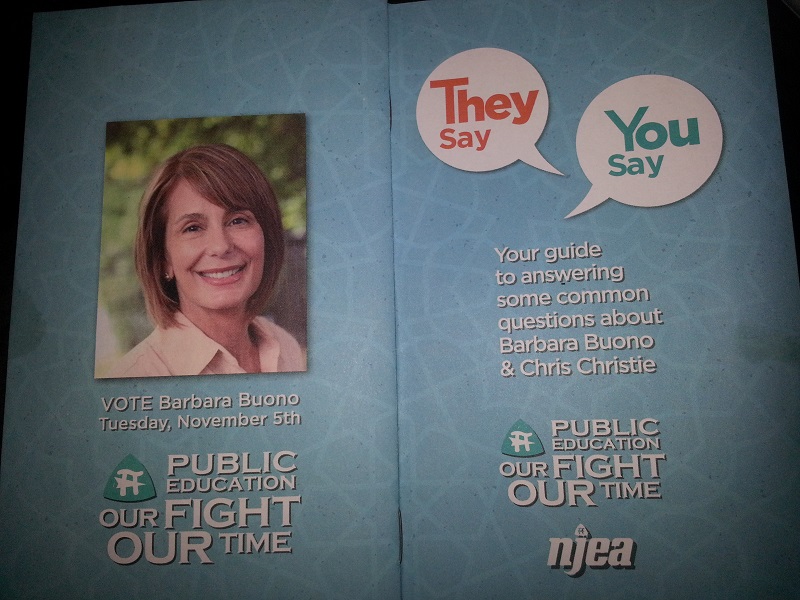 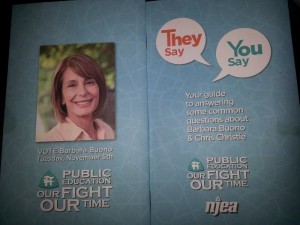 Most taxpayers are getting wise to the New Jersey Education Association and its seedy tactics.

Exposing the many abuses of public sector unions -and making it okay to criticize them for it – may ultimately prove to be Chris Christie’s single greatest accomplishment since formally entering the national stage in 2009.

With that being said, Save Jerseyans, I’m still not sure many voters understand the obscene amount of time, energy and sometimes TAX DOLLARS these unions sink into brainwashing their memberships through the use of propaganda, misinformation and intimidation, either directly with dues or through its “non-profit” activities.

Of course the NJEA could quit collecting 9-figures every year in dues and ask that the money be redirected to a host of better uses. Instead, the union’s leadership prefers to spend their members’ hard-earned cash to influence legislative races via its new Super PAC with the objective of protecting its fat cats’ political influence. It’s sick stuff!

Save Jersey sources are embedded throughout the public school system, too; they’ve clued us into the materials that NJEA union reps are handing out to educators who dare not speak out against the status quo or risk retribution and ostracization.

The image posted above is from the cover of a pamphlet entitled “Public Education: Our Fight, Our Time” distributed at NJEA meetings and, presumably, financed by the regular PAC, in support of Democrat gubernatorial candidate and mediocre Fonzie impersonator Barbara Buono (BWOH’-noh).

I’m not going to beat around the bush. I never do. The booklet is chock-full of lies and half-truths about the Christie education record; even more interestingly to folks who don’t “get the joke,” the NJEA’s expended most of their ink discussing Planned Parenthood funding and other topics which don’t have much of anything to do with our kids’ education.

The NJEA could tell their teachers the truth OR at least provide arguments from both sides. Ironically, isn’t that the entire point of an education? What a concept!

Allow me to try to pick up the slack. Here’s what the NJEA conveniently DID NOT include in its booklet (h/t Christie for Governor):

Buono Thinks Only 200 Failing Schools Out Of More Than 2,000 Was Not “A Bad Percentage.” Buono: “‘The governor talks about our 200 failing schools,’ said Buono. But ‘In the State of New Jersey, we have 2,485 schools. I don’t think that’s a bad percentage.’” (Max Pizarro, “Stung By Budget Committee Vote, Buono Crowd Drills Christie’s Education Agenda,” PolitickerNJ, 1/20/11)

Buono Opposes Performance Pay For Teachers “There is a growing body of research indicating that short-term incentive plans and pay-for-performance programs do not work and often result in poorer outcomes.” (Candidate Questionnaire, Home News Tribune, 10/30/11)

Despite Originally Voting For Tenure Reform, Buono Now Claims She Had “Grave Concerns. “I did vote for it, but I had grave concerns that it seemed to be the tail wagging the dog without a meaningful evaluation piece already established and tested … Unfortunately, I think some of my fears are being realized.” (John Mooney, “Buono Begins To Divulge Details Of Her Ambitious Education Agenda,” NJ Spotlight, 9/4/13)

Buono Opposes Charter Schools: “Charters were never meant to replace public schools…People are trying to use simplistic solutions to complex problems, and charter schools are not the answer”  (Matthew McGrath, “Buono sketches education policy in meeting with school advocates,” NorthJersey.com, 8/1/13)

Bouno Opposes State Intervention In Struggling Districts. [Buono] “supports an effort by the Newark School Advisory Board to end the state’s control of Newark’s public school system.  … ‘I think Newark has satisfied all the conditions under the law,” she said.” (Paul Milo, “Buono Supports Ending State Control of Newark Schools,” Newark Patch, 5/8/13)

Regardless of where you fall on the ideological spectrum, folks, we should be able to agree on this obvious point: the NJEA hasn’t done right by its membership.

We all have teachers in our lives. If you care about them, then please share this post with one and follow-up by initiating a substantive discussion on the issues. They deserve the truth as much as our children deserve better than what they’re getting from the NJEA-defended public school monopoly.

54 thoughts on “The NJEA Brainwashing Booklet”