Palin, Levin to Stump for Lonegan 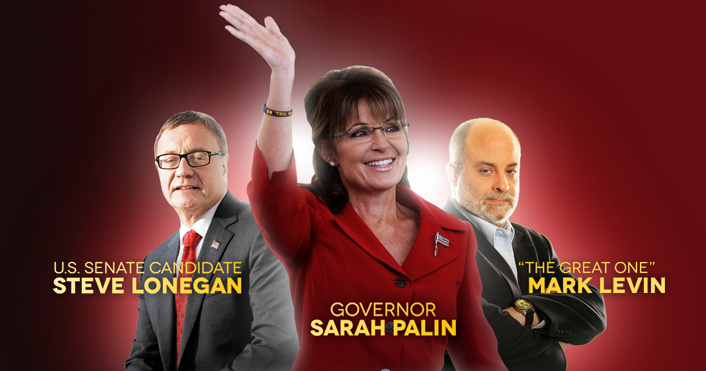 Ready or not, Save Jerseyans, here she comes.

One of America’s most controversial and polarizing political figures is coming to New Egypt on Saturday to campaign for U.S. Senate Candidate Steve Lonegan as his race against Cory Booker (D-Twitter) enters the final 72 hour sprint.

Palin is advertising for the event via her national organization, Tea Party Express, which is scheduled for Saturday October 12th. She’ll be joined by popular conservative talker and Reagan Administration alum Mark Levin.

The former Alaska Governor formally endorsed Lonegan last week but, at the time, was not expected to visit the state. Mayor Lonegan’s campaign is betting that driving up base turnout in an unusual special election can overcome Booker’s shrinking but admittedly comfortable public polling lead. He’s going to the right place if you buy into that strategy; heavily Republican Ocean County and the other red Jersey Shore counties provided Governor Christie’s margin of victory (and then some) in 2009. Ocean alone provided approximately 82% of the Governor’s statewide victory margin.

No one denies that Cory Booker is ahead as this race winds down. “How much” is the relevant question. A new Stockton poll released Thursday afternoon found Newark’s part-time mayor leading his Republican opponent by 11-points; the Lonegan campaign still insists that its internal tracking poll reflects a single-digit race.

51 thoughts on “Palin, Levin to Stump for Lonegan”