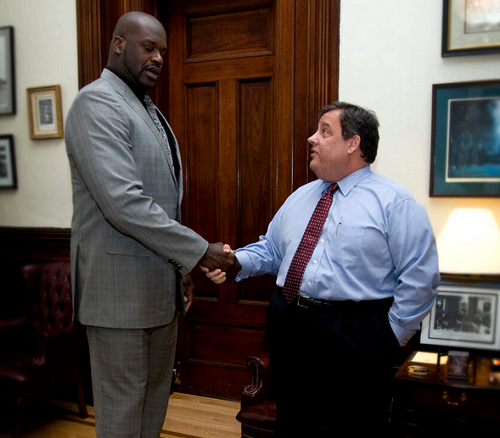 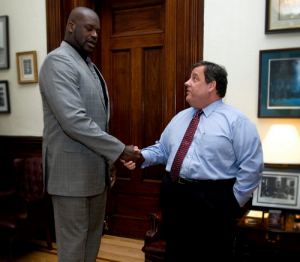 Governor Chris Christie wrapped up two more endorsements on Sunday as he sprints to the finish of Election 2013, Save Jerseyans.

The Bergen Record‘s endorsement offered plenty of constructive criticism but wasn’t “qualified” like the Star-Ledger‘s endorsement or, to a less extent, that of the Philadelphia Inquirer.

“The governor is not just a personality; he is an effective, strong chief executive,” the editorial board concluded. “Turning Trenton right side up is a remarkable achievement over just four years. He deserves another term.”

Newspaper endorsements are nice; Christie’s team is admittedly much more psyched about a new TV ad featuring an endorsement from none other than basketball legend Shaquille O’Neal touting the Republican incumbent as a “great man” worth of reelection…

Shaq’s commercial script is a ringing endorsement of the Christie reelection narrative:

“I don’t endorse many politicians. But Chris Christie is different. He’s working with me to bring jobs back to our cities and on a new program to help kids in tough neighborhoods get ahead. Governor Christie’s provided more funding for schools, given parents more choices in what schools their kids can go to, and merit pay for good teachers. He’s a good man. Excuse me… he’s a great man. Please join me in supporting Chris Christie: the Governor.”

Governor Christie had recently appointed Shaq as an “ambassador” to urban New Jersey to combat violence. Christie’s campaign is making a hard push to post impressive Election Day margins with the minority electorate with an eye on 2016. Public polling suggests it may be working.