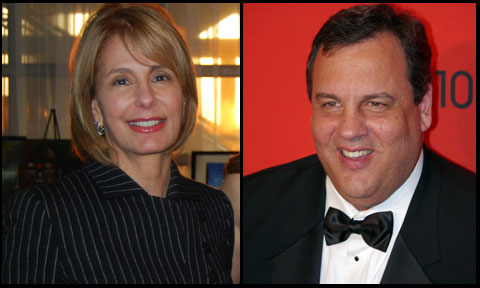 Barbara Buono has big plans for education in New Jersey.

Now, all she needs is a way to pay for it all.

Buono is a state senator from Middlesex County and the Democratic candidate for next week’s gubernatorial election in the Garden State, where she hopes to unseat Gov. Chris Christie, who is seeking his second term as New Jersey’s chief executive.  Much of the campaign has been fought over education policy, which should come as no surprise after Christie spent much of his first term in pitched battles with the state’s teachers union and education establishment.[1]

In ads, Buono slams Christie for cutting as much as $800 million from basic education and abandoning the state’s so-called “funding formula” for public schools. She promises to restore that funding — and more.

“I believe that we need to build on what we have in New Jersey, the traditional public schools,” Buono said last week.

She also wants to fund full-day kindergarten in all school districts, universal pre-k programs for all New Jersey toddlers and expand the state’s aid for college students [2].

But Buono and her campaign have been relatively silent on how the state’s taxpayers would pay for all that. The one, oft-repeated line is a familiar one: make the rich pay their “fair share” to support public education.

More specifically, Buono’s campaign said it would raise taxes on anyone making more than $500,000 annually. As a side note, the state raised the rate for those same so-called “top earners” in 2004, so Buono’s proposal would add another “millionaire’s tax” on top of the state’s existing “millionaire’s tax.”

Both camps seem to agree the proposed tax increase would generate about $650 million annually, though such estimates are tricky since tax policy usually looks different in statute than it does on the stump.

“My budget would be focused on standing up for the middle class and the working poor,” the candidate told WNYC-FM during an interview last week. “But the details would have to be worked out.”

Assuming the $650 million estimate is accurate, it would provide a sizable amount of cash for the state coffers, but it will only go so far towards meeting the senator’s promises.

Her goal to restore the public education funding cut by Christie would cost nearly $1 billion by itself, leaving Buono with a deficit to fill before she could even get started on funding the pre-K or college initiatives.

When it comes to preschool, the prices are a little tougher to determine.  Buono said she wants “expand quality preschool” options for all school districts. But what counts as “quality preschool,” and how much would it cost?

According to the National Institute for Early Education Research, conveniently located at New Jersey’s own Rutgers University, it would cost about $1 billion for the state to offer a six-hour daily pre-K program to all 4-year-olds. A more robust nine-hour program would cost about $1.5 billion annually.

If Buono wants to expand preschool to all 3-year-olds as well, those costs would roughly double.[3]

Buono promises she will be able to pay for all of this without forcing districts to raise property taxes, something she has hammered Christie for doing. She said she will prioritize education in the state budget and cut back on tax credit programs for companies in the state.

On Tuesday, Buono conceded the universal preschool aspect of her education platform would not be able to be implemented immediately. [4] She said the state of the economy was to blame, according to NJ.com.

Then there is the question of whether more money for public education is even the best solution.

New Jersey already spends more than $19,000 per pupil, well above the national average of $12,000 per pupil. During the 2011-12 school year, the most recent for which data is available, only Alaska, New York, Vermont and Wyoming spent more per pupil on their public school systems.

When it comes to higher education, there are so few details available about Buono’s plan “to make higher education more affordable” that it is nearly impossible to track down specific costs.

She wants to bring down the cost of tuition at New Jersey’s public colleges by increasing state funding to the schools, creating a new scholarship program for New Jersey students and a new tax credit program to encourage parents to save for their kids’ college expenses.

Christie has called Buono’s education plans a “pie in the sky idea that she’s shown no way of paying for. [5]”

The state’s largest paper seemed to agree. In endorsing Christie last month, the Newark Star-Ledger called Buono’s education plan “a disappointment,” because it abandons the reforms enacted by Christie during his first term. The governor quickly pounced on those words with a TV ad slamming Buono [6].

Christie didn’t shy away from confrontations with the state’s teachers’ union during his first term, and he was able to implement merit pay for teachers, reform the state’s teacher tenure rules, expand charter schools and limit districts’ ability to raise property taxes by more than 2 percent per year.

If re-elected, expect him to make another push for the passage of a statewide school voucher program, the one major element of his first term education agenda that didn’t make it through the Legislature.

Given the long history of animosity between the teachers’ union and Christie, it should be no surprise the New Jersey Education Association is Buono’s biggest campaign donor. The union has already spent more than $1.4 million on the race, according to the latest campaign finance data.

Garden State Forward, a super PAC connected to the union, has spent another $7 million on ads blasting Christie.

[2] She also wants to fund full-day kindergarten in all school districts, universal pre-k programs for all New Jersey toddlers and expand the state’s aid for college students:http://libcloud.s3.amazonaws.com/266/fa/1/743/Education_Policy.pdf

[4] Buono conceded the universal preschool aspect of her education platform would not be able to be implemented immediately.:http://www.nj.com/politics/index.ssf/2013/10/buono_says_she_cant_implement_education_platform_immediately.html

[5] pie in the sky idea that she’s shown no way of paying for.: http://www.njspotlight.com/stories/13/10/27/christie-or-buono-will-the-real-education-governor-please-stand-up/

[6] The governor quickly pounced on those words with a TV ad slamming Buono: http://www.youtube.com/watch?v=YmiDiLoqryU