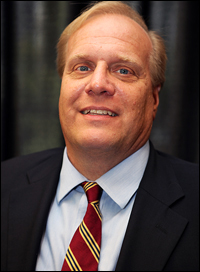 Governor Chris Christie is calling upon David Hespe to stand as his nominee for New Jersey Education Commissioner, Save Jerseyans, a veteran educator who will the fill the vacancy created by Chris Cerf if he is approved by the State Senate.

Hespe’s resume includes a stint as the Education Commissioner during Governor Christine Todd Whitman’s Administration, Chief of Staff at the Department of Education during Christie’s first term, and President of Burlington County College.

Will any of it be enough to avoid a contentious confirmation hearing from an emboldened legislative Democratic majority?

“Ensuring that every child in New Jersey has access to a high-quality education, regardless of zip code or economic status, is the civil rights challenge of our time and has been a priority of my Administration since my first day in office,”  said Governor Christie in the press release announcing Hespe’s nomination. “We have shown that we can bring people together – students, teachers, parents and administrators – to put big, bold ideas into action that address every one of our children’s educational needs.” We’ve made great progress over the last four years, but our work isn’t done. So, I am gratified that David has agreed to come back to work in my Administration and allow our students and our schools to benefit from his extensive experience, his passion for education excellence and his proven track record of getting results at every level of public education in New Jersey.”

Some biographical excepts from the Governor’s release…

David Hespe is a recognized leader among New Jersey’s education community, overseeing the development and implementation of educational programs, curricula and goals for an entire school district as well as at institutions of higher learning. Mr. Hespe most recently served as President and Chief Executive Officer of Burlington County College, overseeing an enrollment of more than 10,000 students across four campuses. He also previously served as an Associate Professor of Educational Leadership at Rowan University’s College of Education, where he was Department Chair for five years. As the former Assistant Superintendant and later Interim Superintendant of Schools for the Willingboro School District, Mr. Hespe also oversaw the administration of all activities of the district and the development and implementation of goals and programs.

Mr. Hespe also developed and implemented STEM-based educational programs, activities and content for Liberty Science Center during his tenure there as Co-Executive Director and Vice President of STEM Education. His invaluable knowledge and experience in STEM-based programs and activities will help increase interest and awareness of the importance of science, technology, engineering and mathematics curricula and programs, all of which are crucial components to ensuring that New Jersey’s students are ready to compete in a competitive, global economy.

Mr. Hespe holds a Bachelor of Arts Degree from Rutgers University as well as a Law Degree from Rutgers-Newark. He began his career as a law clerk at the Mercer County Superior Court and then joined a private law firm before entering public service in 1989 as an Associate Counsel at the Office of Legislative Services. Mr. Hespe went on to join Governor Whitman’s Administration, where he began as an Assistant Counsel in the Governor’s Office and later served as the Assistant Education Commissioner; the First Assistant Attorney General; and Education Commissioner.