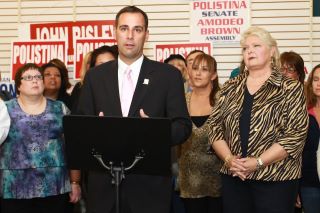 Let’s start sorting this out (to the extent possible) with some background via Mr. Hurley:

“At one point, several well placed insiders confirmed to me that Davis was willing to step down and ensure a smooth transition. This would have basically left Davis in place as a highly regarded Chairman Emeritus. Polistina had just about cleared the field.

That was until a high ranking Republican (elected) leader at the County level met with Davis and began to aggressively attempt to talk him out of it. We’re going to leave this leader unnamed at this time.”

You can click here to listen to the exclusive interview with Polistina.

As Hurley explained on his WPG 1450AM radio program Monday morning, fault lines have been opening up in the Atlantic County GOP for a little while now in a county that’s famous for its combustible politics, going all the way back to June 2012 but perhaps blown wide open by the defeat of Asm. John Amodeo last fall:

A very painful lesson learned is the most recent example of Will Pauls versus Joe McDevitt Primary contest for an Atlantic County Freeholder at Large seat. This in house battle (alone) most likely cost former Assemblyman John Amodeo his seat in the New Jersey Legislature … as staunch McDevitt supporters did not vote for Amodeo last year in the General Election, whereby Assemblyman Vince Mazzeo defeated Amodeo by less than 50 votes.

For a little more background on Polistina, Pauls, McDevitt, and Amodeo (among other characters in this story), you can read my possible Amodeo successor piece from back in December. We had previously reported that Polistina backers wanted him to get back into the Assembly ring and challenge Mazzeo. Now it looks like they have other plans.

Keith Davis, a successful and sharp A.C.-area lawyer, is the “chair of the chairs” for the New Jersey Republican Party and has long been considered a rising star in state politics. Davis did a lot over the years to maintain almost hegemonic GOP control in a county with a strong Democrat registration advantage. He’s nevertheless been forced to traverse a tough road as of late as the father of two young boys who tragically lost his wife, their mother, back in 2012. Some Republicans who’ve spoken to Save Jersey (but never on anything other than background for fear of sounding like insensitive jerks) blame last fall’s losses on an allegedly distracted Davis trying to balance work and family life with the demands of managing a major political organization.

An articulate conservative who was popular among the grassroots, former Assemblyman Polistina, who has deep roots in his native Galloway, runs an engineering firm boasting substantial public contracts; he may’ve decided to stick to the political rather than legislative end of the game owing to the fact that his firm could lose out if he heads back to Trenton. Polistina left the stage after losing a bruising state senate race to Jim Whelan, at which time he was replaced in the Assembly by attorney and war veteran Chris Brown.

Hurley also reports that former State Senator and Egg Harbor Mayor Sonny McCollough is backing Polistina. I have it on good authority that County Executive Denny Levinson, long considered the county’s most powerful Republican, is likely standing by Davis. McCollough’s bloc of votes from Egg Harbor will make him difficult to fend off without a solid show of support from the county’s smaller municipalities.

Other players OUTSIDE of Atlantic, however, could play a decisive role and can’t be discounted. It could even turn into another flash point between frenemies in CD3’s Burlington and Ocean counties.

Arguably the most powerful Republican outside of Atlantic County (and the Christie Administration) is George Gilmore, chairman of neighboring Ocean County. Gilmore is close with Davis, even showing up on election night 2013 in Atlantic County to celebrate the victory of GOP Mayoral Candidate Don Guardian in Atlantic City rather than head north to the Governor’s party in Asbury Park. Gilmore also reportedly had the honor of introducing Mayor-elect Guardian at the annual chairman’s dinner at Knife & Fork in Atlantic City last November.

But Burlington’s Bill Layton is no slouch either, and he reportedly has a less-than-close relationship with Davis though there’s as-of-yet no indication that he’s weighed in on either side.

I know… even Nucky would have trouble keeping tack of it all! Time will tell whether outside forces take a position and attempt to affect the calculus.

When reached for comment this morning, Chairman Davis unequivocally expressed his desire to continue leading the ACGOP and he classified Polistina’s challenge as a distraction in an otherwise critical cycle for the party:

“I am absolutely running for chairman.  We’ve achieved too much and I’m determined that we’re not going to let individuals who have chosen to align themselves with former Atlantic City Mayor Lorenzo Langford to drive our party into the ground.  There is too much at stake this year with Congressman Frank LoBiondo, Sheriff Frank Balles and Freeholders John Risley and Alex Marino on the ticket.  Now is the time for unity, not pettiness and this unfortunate distraction.  I look forward to being reelected in June and having a successful year for Republicans in Atlantic County once again.”

The ACGOP convention is currently slated for March 24th. Stay tuned, Save Jerseyans.