Coulter Gets It Half Right 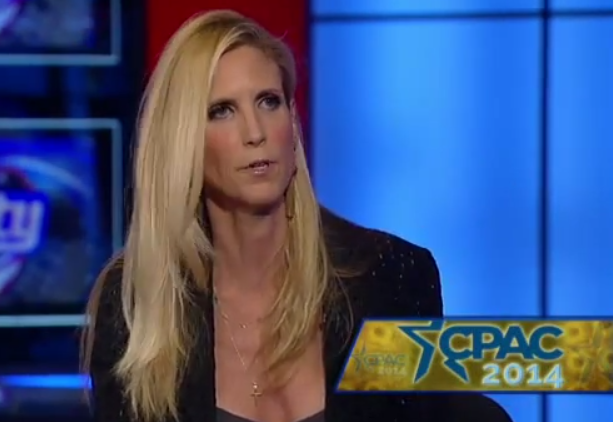 Ann Coulter offered up a few good points in her CPAC interview with Sean Hannity, Save Jerseyans, including a critique of the mob mentality of those conservatives going after Mitch McConnell in this year’s Kentucky Primary.

Her critique of Chris Christie’s CPAC address? Or more precisely, her analysis of the reaction? Half right:

Yes, conservatives who still distrust MSNBC more than Christie are inclined to side with him over them notwithstanding their growing list of reservations.

But Coulter provided Hannity’s Fox News audience with the complete answer without knowing it. Governor Christie continues to benefit, I’d argue in spite of himself, from inherent weaknesses in the White House and the rest of the Republican field. As much as I’m a fan of the guy, Senator Rubio’s unfortunate vacillation on the immigration reform issue, referenced by Coulter in the segment above, serves as a prime example of the reason why Chris Christie is still in the hunt despite being beset by public scandals and acts of conservative heresy.

What did the Governor’s CPAC reception tell me? Other than that conservatives are generally polite people? An unspoken truth: the Republican Party – and even a significant sample of this year’s CPAC crowd – is tiring of the “purity” approach to base politics. It failed spectacularly in 2012.

We’re willing to trying something different this time around. We’re craving a strong man after many years of exile. Someone who says the right things in a debate with Hillary Clinton and seems fully-capable of staring down Vlad the Putin. So the question of the hour is whether Chris Christie still has enough string on the spool to thread the needle or, alternatively, if someone like Scott Walker can jump into the race and blow this baby wide open.

It all goes quite a bit deeper than antipathy for the MSM mafia. That’s a symptom. Not the disease.

44 thoughts on “Coulter Gets It Half Right”