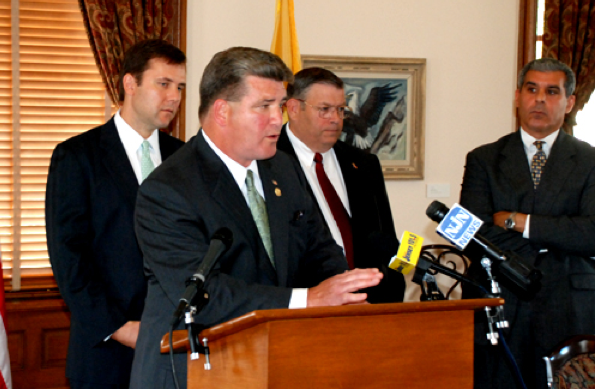 A word cloud consisting of one word: liberty.

“Murray Sabrin’s decades-long commitment to limited government, individual liberty and independence and personal responsibility place him head and shoulders above his primary opponents,” said Oroho, McHose and Space in a joint statement.

“With his in-depth knowledge of finance and economics, he alone among the GOP contenders for the Senate nomination grasps the issues facing New Jersey and the nation. No one is better prepared to represent New Jersey in Washington, D.C. and debate the issues of spending, taxes, the budget, the National Debt and individual freedom and liberty than Murray Sabrin.”

Doherty, for his part, issued a separate statement through the campaign focusing on Professor Sabrin’s decidedly libertarian foreign policy perspective, one to which Doherty, a former military officer and Ron Paul-backer, certainly subscribes. “Murray Sabrin’s foreign policy views are very similar to mine,” he said. “Sure, we need a strong defense, but we don’t need to meddle in every scuffle that crops up around the globe.”

“We’ve got enough to do here at home that isn’t getting done, so it makes no sense to get involved in conflicts half-way around the world – let Europe clean up Europe,” Doherty added.

The county committees have split thus far but this is a busy week, Save Jerseyans, with Republican conventions in Middlesex, Cumberland, and three of the four “Christie Gold Coast” counties of Cape May, Ocean and Monmouth where the incumbent Governor garnered the bulk of his victory margin in 2009.

Something that interests me on the policy/macro-political levels: how, if at all, the ongoing GOP internal debate over America’s role in the world, waged between traditional conservatives and Paulite libertarians, enters into and affects not just 2016 but also CD3 and the U.S. Senate contest this year particularly in light of the events in Crimea…