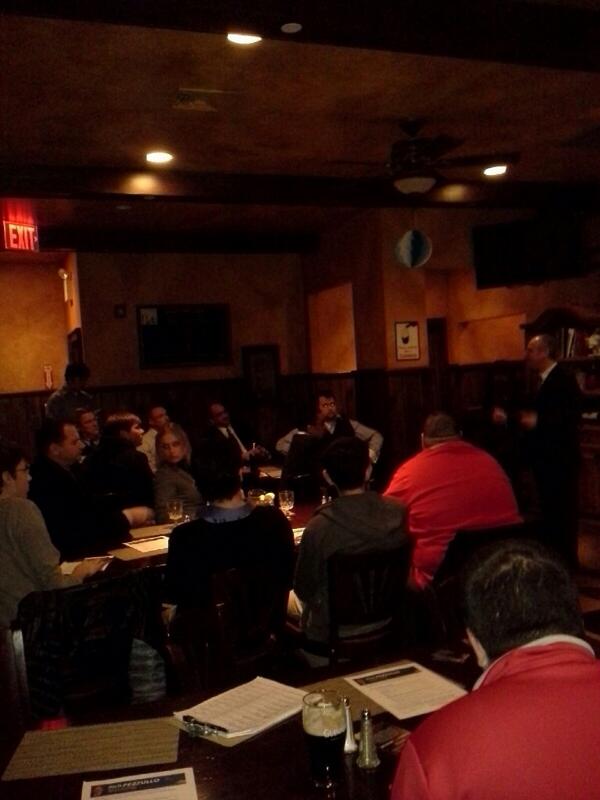 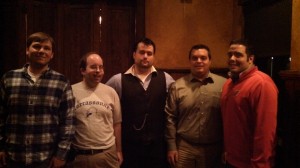 Over 25 people attended the Bergen County Young Republican “Meet the Candidates” meeting at 8:00pm at local watering hole The Poitin Still in Hackensack last Monday, Save Jerseyans, and they were joined by three of five candidates for the Republican nomination for US Senate: Rich Pezzullo, Murray Sabrin, and Brian Goldberg.

After the meeting, newly-minted BCYR Chairman Al Enriquez and Secretary Daniel Joseph Giurleo were nice enough to sit down and talk with me about their vision for the organization and their past political experiences.

Chairman Enriquez, whose political involvement “started out volunteering for the reelection for President George W. Bush” reported continuing his activism in the Christie campaign. “During the Christie campaign I came across the YR’s and it was very exciting to meet a group of Republicans my own age with similar beliefs.” Through his three year involvement with the BCYR’s, including last years as Secretary, he has seen the growth of the clubs growing efforts in supporting Republican candidates “in Bergen County and beyond.”

Giurleo, a convert to GOP (like myself), said “I used to favor Democratic policies but when I began to look into their policies I quickly noticed how dangerous they are.” He continued, “we need to take action to stop the Democratic encroachment on our rights and our financial future.” Speaking of the growth of big government he said “I want to be a part of putting the brakes on it.”

Both Enriquez and Giurleo discussed reaching out to traditionally non-Republican voters. “We need to show the public that our party is the big tent party.”

Giurleo followed up with his feelings on the issue, “we need to be more inclusive of minorities and gays, and reach out and share our message of opportunity.” Enriquez anecdotally brought up his own ethnicity and family. “I’m a Hispanic and I have family members that are gay and they are Republicans and they are told they are not supposed to be Republicans.”

Addressing electoral prospects in Bergen County, which is a battleground county with a increasing Democratic lean, Enriquez said “Republicans and Democrats are very concerned with the fiscal challenges we face which is why we need to focus on job creation and education.”

“We need to get out in front of more people – from every walk of life, from every background, including Independents and spread the message.”