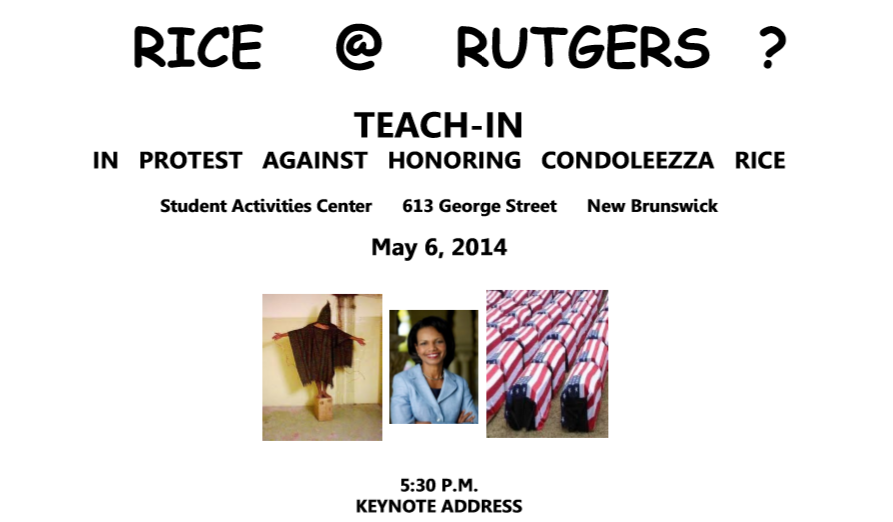 Save Jersey vigorously opposed the 2012 Rutgers-Rowan merger push for a number of reasons, Save Jerseyans, not the least of which was our concerns for what it would do to the national Rutgers University brand.

Isn’t it amazing how several dozen radicalized students and faculty members can do more damage to that brand with one stupid stunt than the State House could inflict by way of legislation over the course of years? Amazing is probably an understatement. ‘Stupefying’ is more like it.

The upcoming 2014-2015 academic year was supposed to be one of opportunity and possibilities for an RU community after having been beset by scandals and bad press over the past few years. It can certainly help, but a highly-subsidized Big Ten football program does not a university make!

If Rutgers is going to emerge as a genuine premiere national university over the next decade, then it need to think beyond its bungled commencement ceremony seriously needs to internalize the lessons of the recent Condi Rice incident.

Step #1: who is teaching our kids, and what are they teaching?

To be sure, Dr. Rice was a MAJOR coup for a university which never nets a major name for commencement. Ever. The 2013 speaker was a former state supreme court justice. Only slightly more exciting in 2012 was the CEO of Motorola Solutions. Condi would’ve been far-and-away the most high-profile and accomplished Rutgers spring graduation speaker within living memory.

Rather than seize an opportunity to either (1) celebrate this giant get or, alternatively, (2) encourage spirited but respectful discussions concerning her legacy, professors on the Rutgers payroll actively encouraged a full-fledged campus insurgency that served only to embarrass a great institution and deprive the campus community of a wonderful chance for growth. No one learned nuthin’, other than to thing long and hard before spending big bucks on a school where the inmates are evidently running the asylum.

It’s a tale without heroes besides Rice herself.

One professor pushing the anti-Rutgers protest was William Field, Undergraduate Program Director for the Department of Political Science and, perhaps uncoincidentally, an unsuccessful 2013 Democrat candidate for the state legislator in LD30. On May 2nd, he forwarded an email obtained by Save Jersey to the entire RU poli-sci student list, asking recipients to “open the attached flier and to attend the teach in to learn more about why students and faculty are upset.” Field insisted that “[w]hether or not you have a position on her appearance, the teach in will be very informative.”

What Professor Field conspicuously failed to explain to his students (see the flyer referenced by his email on the top right) is how an event advertised by an image of Dr. Rice sandwiched by photos of a torture victim and service member coffins, respectively, could engender a balanced and constructive debate on campus.

Somehow I doubt that he cared. Field’s attempt to encourage opposition to the Rice commencement was nevertheless tame compared to what some of his colleagues perpetrated. NJ.com’s Kelly Heyboer wrote up a solid timeline of the events surrounding controversy over last weekend, and at least once student with whom she spoke complained about her chemistry professor’s proselytizing.

She wasn’t alone. A second email forwarded to Save Jersey that was originally authored back in April came from Meredeth Turshen, a professor at the prestigious E.J. Bloustein School of Planning & Public Policy whose CV indicated that she focuses her academic research on war, reproduction and colonialism. You can guess where this is going…

“Condoleezza Rice helped launch a war on false pretexts and helped authorize torture,” Turshen insisted, all the while asking recipients to “spread the word” and “post the flyers” (see above) in all capitals. “Should she be giving our Commencement address? Should we award her an honorary Doctorate of Laws?”

I’ll ask you again: does that sound like an educator innocently and sincerely trying to “inform” students?

Just for shits and giggles, I performed a Google search for “Meredeth Turshen” and “Snooki” but didn’t come across any published outrage from this particular academic, who apparently spends most of her time writing about atrocities experienced by women in war zones, over her university paying $32,000 to the absolute antithesis of the feminist ideal.

Overwhelming and uncompromising liberal dominance on college campuses is nothing new, Save Jerseyans. That market is crowded. If RU wants to distinguish itself in a positive way after a long run of bad press, then it might want to consider becoming the institution that brings balance back to the force instead of limping along behind the rest of the pack.