Sometimes I wonder, Save Jerseyans, and by “sometimes” I mean daily.

It seems so long ago now, doesn’t it? Chris Christie rolled into Trenton like a thunder storm in 2010, upturning a decades-old tax, spend ‘n’ borrow status quo under the State House dome and forging a new center-right alliance with non-ideological machine Democrats on key issues notably including pension and benefits reform and a property tax cap.

That was before the legislative redistricting disaster changed everything. I don’t need to revisit the whole tragedy play here. You lived it. Trenton is returning to its natural order and the key Christie reforms – all statutory and therefore vulnerable to attack by a Democrat majority – are eroding piece by piece. The worst thing that snuck through – a job-killing minimum wage hike – is constitutionally-enshrined and not easily remedied.

You might say that the host has rejected the transplant, and there’s a growing consensus (which you heard here first!) that New Jersey’s fiscal woes are a bigger roadblock for Governor Christie’s presidential aspirations than an overblown Bridgegate scandal.

Another medical example fits with my analogy and fully illustrates the cultural problem plaguing our politics.

Pharmaceutical companies, long a mainstay of the North Jersey economy, are “consolidating and scaling back operations in the state” according to a recent report in the Business Insider. They’re flocking to locales like Florida with much more favorable business climates.

Democrats won’t answer the question. They’re content to tax, borrow, and spend our state’s remaining residents in order to satisfy their labor backers until there’s no one left to tax. 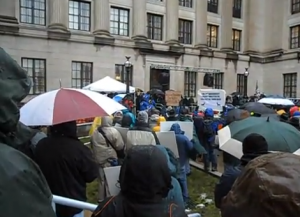 And what can we do? How do we begin to combat the cancerous, dominant attitude in Trenton? Is it even possible?

I suppose the political equivalent of New Jersey white blood cells is the elevation of more conservative Republican local officials, school board members and party officials in our own communities.

What do I do towards that end? Besides blog? Well, for starters, I visit numerous New Jersey local GOP clubs/organizations in a given calendar year and discuss my experiences with local campaigning, activism and, of course, social media. In my humble opinion, local campaigning and social media activism have two things in common: (1) they’re relatively cheap, and (2) they allow thoughtful people to interact without the stigma of selective partisan hearing, or said another way, you can relate on a personal level without getting bogged down with labels.

Most current GOP “luminaries” either shout conservatism (or their version of it) at potential converts or cower away from sharing it at all. We’re losing when we’re not teaching, Save Jerseyans. Your neighbor is much more likely to listen to you, the local baseball coach or Sunday school teacher, than another stupid television advertisement narrator.

“Community organizing” is a dirty word in Republican circles post-2008. But guess what? It works! I try to do it right here with our digital community; you need to get off your rump and try it in your own neighborhood.

Don’t delude yourselves into believing there’s an easy way out of thi smess. A more dramatic, one-shot surgical solution (like a massive indictment taking down several major corrupt Democrat party bosses) isn’t likely. GOP party leaders, including high-ranking legislators and chairmen with an eye to the future, should start working on state senate candidate recruitment without delay, and their allies should explore the formation of independent expenditure committees of the kind that played a decisive role for Democrats in 2013, but you and I both know that we can’t count on anyone to restore New Jersey’s fiscal health save the body politic for us.

No, the only solution in the long-haul involves you and I working together to generate the civic antibodies described above so that conditions are ripe (or at least superiorly favorable) for the next leader capable of challenging Trenton’s diseased status quo.

It’s not the answer we wanted, I know, but there are worse diagnoses! We’re not terminal. Yet. Let’s get busy…

39 thoughts on “Is Trenton’s Cancer Inoperable?”