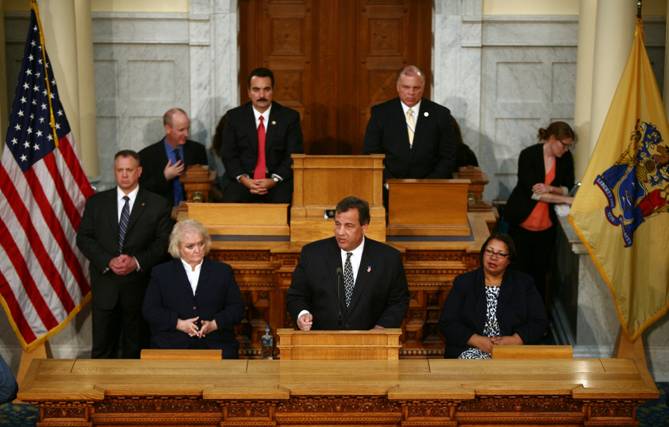 Chris Christie addressed a joint session of the legislature on Thursday and his message was painfully simple, Save Jerseyans:

“I believe that I’ve been patient. And 2 1/2 of conversation and discussion, it seems to me, is sufficient.”

He’s referring, of course, to bail reform which in of itself isn’t very controversial. The Republican Governor and former U.S. Attorney – who is anything but a libertarian – joked about finding himself in bed with the ACLU on this particular issue, and the N.J. Supreme Court is on his side, too. Many South Jersey machine Democrats are backing it. Asm. Jon Bramnick, the GOP Assembly Minority Leader, says that there are sufficient votes for passage in his chamber.

So what’s the hold-up? Politics! What else…

Back bench Democrats have moaned and groaned that it’s little more than a “photo op” for the Governor. They’re not entirely wrong. The Big Guy needs a win given everything he’s been dealing with at home as of late. Winning additional pension reforms is going to be a much harder fight since, as you and I well know, the Democrats’ public sector union masters will only allow them so much slack on the leash before the rebel. Moreover, Gov. Christie needs to reassure people that he’s doing more than only jet-setting and raising money for the RGA… and 2016.

Democrats want to deny him the opportunity.

I say not “entirely” wrong because everything in the preceding paragraph is true. That does NOT, however, mean our bail system isn’t in need of reform. It is. Urgently. Did you know that a recent study found no less than one-third of defendants released before trial being charged with some species of misconduct prior to their trial date? And one-sixth were arrested for a fresh offense, one-half of which were felonies?

The most important reform contained in the bail overhaul package is, again, simple: allow judges to consider the safety of the community – not just the crime itself and flight risk – in setting a bail figure.

The clock is ticking to see whether Steve Sweeney and Vince Prieto have any.