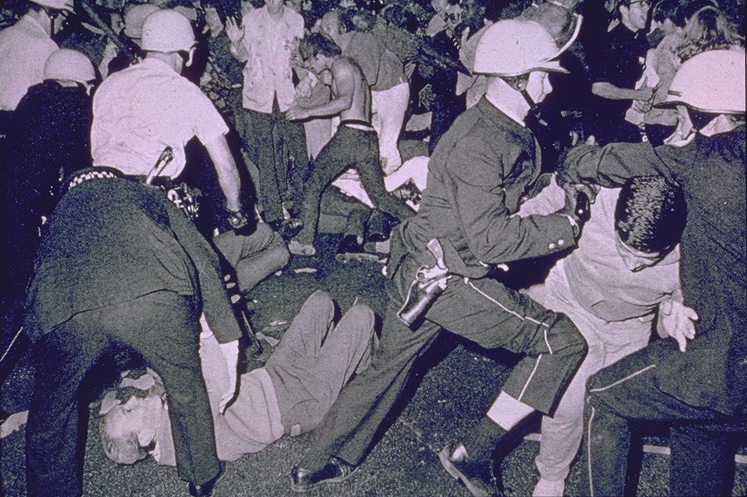 Bored with the post-Ferguson and post-Staten Island misbehavings? If so, welcome to the club. And welcome to history repeating itself, because 1968 is going déjà vu all over again.

Democrats who read this blog – we know you’re out there because the NSA tells us – take note: the riots and demonstrations stemming from grand jury decisions in Ferguson and Staten Island will come back to bite you in the 2016 presidential-race butt just like you were bitten in 1968.

What brought this to mind was an astute observation made by the Manhattan Institute’s John Leo on Facebook a couple of days ago:

“Everyone knows that the longer the post-Ferguson violence goes on, the more likely the next president will be Republican. That may be why (The New York) Times…has a long and warm view of the Berkeley protests with all the arson, looting and vandalism dropped out of the story.”

Don’t believe it? Ask the ghosts of Hubert Humphrey and Richard Nixon. If you don’t know who they are, what business do you have reading this in the first place? Suffice to say, they ran for president in 1968, the last time two vice-presidents faced each other, with Humphrey the sitting and Nixon a former.  Humphrey came out on the political short end of civil unrest leading up to the election, while the latter – well, we all know about former President Nixon.

While the difference between 1968 and 2016 is almost a half-century, the events of then are as if they happened yesterday.

Riots and demonstrations following the April 1968 assassination of Martin Luther King, Jr. and the violent clash between police and anti-Vietnam War protesters and Yippies – talk about police overreaction –  at the August Democratic National Convention made Nixon’s appeal for “law and order” a winning strategy. It was said of the Chicago riots, “On that night, America voted for Richard Nixon.”

There are more similarities: Like 1968, the incumbent party has to defend an unpopular war, the Democratic heir-apparent will face challenges from the left – progressive Massachusetts Sen. Elizabeth Warren is an abyss of presidential ambition – going into the race Democrats are intellectually bankrupt and politically exhausted and will face invigorated Republicans coming off their own electoral humiliation – then in 1964, and now in 2008 and 2012 – who will be tan, rested and red-meat ready.

In the meantime, race hucksters Al Sharpton and Jesse Jackson have Democrats by the short hairs, so they don’t dare call them on their hubris or offer any but the feeblest criticism of rioters. Push back would also result in white progressives tagging them as “insensitive” purveyors of “white privilege.”  Democrats can’t being politically incorrect, so they’ll will dance to the activists’ tune and bow down to their extortion by pinning most of the blame on the police. As a result, America won’t trust them to do what’s necessary to keep streets and cities safe.

Perception governs, not reality. While the current protests are milquetoast in comparison to the disturbances back then – see the piece I recently wrote on how puny they really are – Chicken Little’s on social media, left-wing bloggers and cable news outlets will balloon them way out of proportion. You flog revolution talk and “burn this place down” rhetoric strongly enough, and people will take you at your word by demanding that somebody – namely, the very police against whom you’re revolting – smack you down and put you in your place.

Your friends in the media are no help, either, as Mr. Leo noted in commenting on how The New York Times sanitized an article on Berkeley protests by making them seem completely naughty-free. People aren’t stupid – they know better. Plus, you have gadflies like Time.com’s Darlena Cunha extolling the virtue of post-Ferguson wanton mayhem: “Riots are a necessary part of the evolution of society.” Do we hug before or after torching the liquor store?

With friends like these, Democrats, you don’t need enemies.

When you condemn ALL police ALL across the nation ALL the time, which is where Democrats are headed, you create an us-versus-them divide that puts you squarely in the camp of those throwing Molotov cocktails and breaking plate-glass windows and opposed to those who own the businesses that get firebombed and vandalized.  Talking about how you teach your bi-racial son should see cops as the enemy isn’t helpful, but that’s exactly what New York City Mayor Bill de Blasio recently said he does.

While there is a strong racial divide when it comes to approval for police conduct, cops still enjoy overwhelming local-community support – 76 percent had either “a great deal” or “a fair amount” of confidence that their local police were doing a good job, a recent NBC News/Marist Poll found – so there’s that.

But Democrats, you’re hoisting yourselves on your own petard by standing as dumb as a post while the shenanigans continue.  Keep it up and stronger Republican majorities in the House and Senate and a president you will hate will be your only fate.