At 3rd A.C. Summit, Christie Declares ‘Nothing Is Unfixable’ 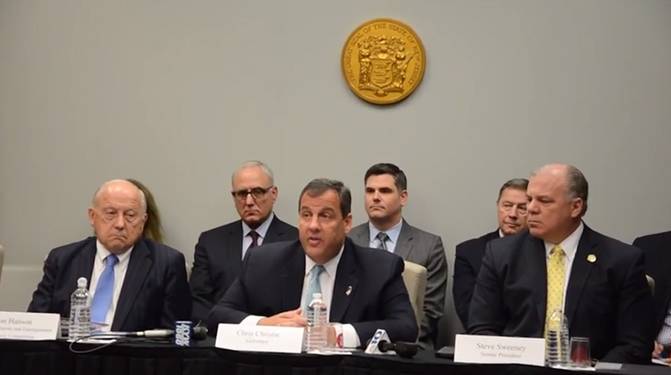 You can read it for the details here, Save Jerseyans:

Governor Christie: We haven’t gotten there, and I can’t wait any longer, and so we need to take more aggressive action and that’s the action that I’m taking today. This is not to declare that what we’ve done before has been a failure. In fact a lot of what we’ve done has improved circumstances here in Atlantic City, but we are digging out of an enormous hole that was brought over a long, decades long period of time, some by bad actions, some by just changed circumstances that were completely out of the control of anyone who was making decisions here in Atlantic City. So these actions are taken. The executive order is signed. I am urging all the parties around this table to understand what’s at stake here, and that any, any type of action towards self interest and provincialism is not going to get us to a solution, and so I brought in experts and given them the authority to use their expertise in partnership with the elected officials in this city. I can assure you that both Kevyn Orr and Kevin Lavin understand their charge from me and they’re going to look to work with everyone in a cooperative way to get this done and I believe in the good faith and the spirit of the mayor and believe that he will do exactly the same thing, not only because I’ve gotten to know him over the time he’s served but also because he has assured us he is ready to work as well, and so we move forward from here. This is something that needs to be done. It’s something all of us worked hard to try to avoid having to do, but it is also let me say not the end of the world. We have problems we have to fix. I absolutely believe that none of them are unfixable if in fact we have the political will to be able to get them done, but that’s up to the people around this table. There is not a person around this table who does not have both a stake in this and there’s not a person around this table who could also not be an extraordinary impediment to ultimate success. I’ve looked in the mirror and made the decision I needed to make in order to try to make this happen, and I know that the people around this table will do the exact same thing and be a part of the solution and not a part of the problem. The people of this city and this region are depending upon us to do that, and a lot of people around this table have a lot at stake for not only yourselves but for people you represent and who count on you each and every day to do your jobs the right way. So I want to thank both Kevyn Orr and Kevin Lavin for their willingness to come forward and to do this job and I want to thank all of you as always for being here today and for being part of both this conversation and the effort that we have to put forward to be able to do what needs to be done. So I thank the members of the media for being here and we’ll now adjourn to a private part of this meeting to have a few other discussions and then there will be an opportunity for you to ask questions of our emergency managers later on. Thank you all very much.

7 thoughts on “At 3rd A.C. Summit, Christie Declares ‘Nothing Is Unfixable’”