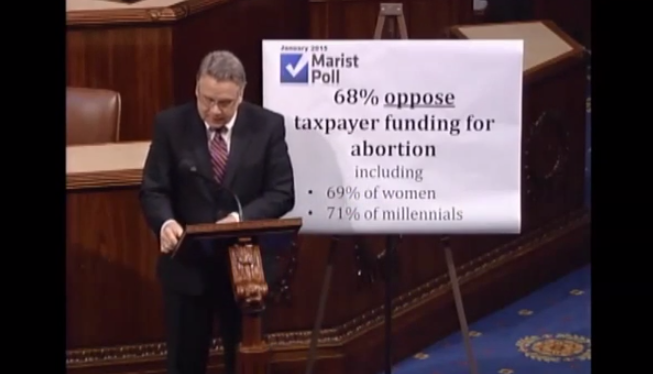 Thousands gathered in Washington, D.C. for the annual pro-life march on Thursday, Save Jerseyans, and our own Congressman Chris Smith (R, NJ-05) took to the floor to support the HR7, the No Taxpayer Funding for Abortion Act, legislation designed to bring Obamacare into conformity with the Hyde Amendment.

“On September 9, 2009 President Obama stood 6 feet from where I stand now and told lawmakers and the American public in a specially called joint session of Congress on healthcare reform that “under our plan, no federal dollars will be used to fund abortion,” said Smith, a internationally-recognized champion of human rights. “Turns out that those ironclad promises made by the President himself are absolutely untrue,” Smith declared while pointing to a recent government report that disproves the President’s assertion.

“An extensive audit by the Government Accountability Office (GAO) released in September of last year found that 1,036 Obamacare exchange plans covered elective abortion,” he continued. “GAO also found that separate billing of the abortion surcharge – required by the Act – is not being enforced by the administration and the abortion-funding premium is again being illegally rolled into the total plan cost,” Smith said.

For Rep. Smith, it’s a moral issue AND one of transparency. “Health care consumers are therefore buying health insurance with little or no knowledge that they are purchasing abortion subsidizing plans,” he continued: