Forty lashes with a wet noodle, that’s what Brian Williams got, not the serious and manly flogging advocated by this reporter that he so richly deserved.

Instead of getting fired from his job as the anchor and chief editor of the NBC Nightly News, which many expected and wanted for fictionalizing his experiences covering the early days of the Iraq War – and probably a whole lot of other things – Williams received a six-month suspension without pay (read the suspension memo from NBC News president Deborah Turness here).

That the suspension had conditions – no appearances on any other NBC program without the permission of the suits in the home office – and that he’s not guaranteed a return to his anchoring job make it rankle more, but it’s not like he’s restricted to home confinement with an ankle bracelet or made to pee in a cup at random, unannounced intervals. 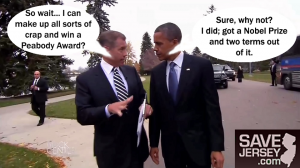 Some “knowledgeable observers” believe he’ll never come back, but like so much Williams-centered speculation of late that has gone kaflooey , don’t bet the farm on it.

Many to most in the chattering pundit class were not impressed: “Brian Williams needs to go” – “NBC went too easy on Brian Williams” – “The Brian Williams suspension: What’s the point?” are the titles of three columns critical of the move and picked at random from The Washington Post.

With an annual salary estimated to be from $10–$13 million, he won’t starve or get evicted from his $2 million Connecticut mansion. Maybe he’ll find a beach in Bali and recuse myself in a chaise lounge while contemplating telling NBC to take their job and shove it; he ain’t workin’ there no more. (H/T Johnny Paycheck, circa 1977).

I mean, if it was you, would you want to come back after the public humiliation and calls for your scalp over the past week or two? Probably not, but you’re not an ego-driven guy from New Jersey who never finished college and went bust in your early 20’s.

No, you’re not a celebrity moth drawn to the bright-lights-and-adulation flame who must constantly have new, self-centered stories with which to regale adoring fans lest they get bored and go someplace else.

After all, the brand you’ve spent a career cultivating isn’t so much journalism as it is journo-entertainment – he’s reported to have wanted to become host of the Tonight Show – and everyone knows that the public is fickle when it comes to entertainment.

Say you find out that your favorite cold cereal has far more rat turds than allowed by the FDA (Hint:  Average of 9 mg or more rodent excreta pellets and/or pellet fragments per kilogram).   When the cereal brand deliberately exceeds the allowable level of crap it becomes stomach-turning, and it’s hard to get customers back once they move on to another, less excrement-laden brand.

It’s not like you’re CBS’s Bob Simon, who was tragically killed in a car accident in Manhattan Wednesday night. A grizzled, 73-year-old veteran, just-the-facts-ma’am reporter with a face best suited for radio, he spent decades covering the news of wars rather than creating fictional accounts of them starring him. That Simon and his CBS crew spent 40 days in an Iraqi prison in 1991 during the first Gulf War where they were beaten with canes after being captured while covering it speaks for itself.

Ordinary mortals who commit the vocational Sins of Brian aren’t suspended, they’re canned. Consider, dear reader, the consequences that would befall you if you told Brian-like whoppers. How long would you last? If you made stuff up that, when disclosed, tarnished your company’s image and the value of your brand, do you think you’d be suspended or fired?

Still, he has a beef with how it went down. Were I Brian Williams, I’d be pissed that I was whacked while tax scofflaw and serial misrememberer Al Sharpton continues to hold down a gig across the hall at MSNBC.

In typical NBC fashion, the decision to suspend him was more a Bungle Brothers Klown Kar circus operation than a systematic, deliberate business decision. For days, back and forth jostling and jockeying between and among Williams and NBC executives over whether/what/severity/duration of any punishment resulted in a lot of bruised egos and hurt feelings.

Given that network executives have known of Williams’ misremembering indiscretions for a very long time, there’s no excuse for not anticipating that he’d have an eventual day of reckoning.

So what else is new, since the network has a track record of botching personnel moves dating back many years. The Brian Williams Hamlet act – to fire, or not to fire; that is the question – was but the latest.

Then, when the suspension was announced, his own colleagues were quick to treat him as if he had cooties. Even now, his name is being quietly scrubbed from the network’s website. On The Today Show, co-host  Savannah Guthrie, herself a rumored Williams replacement, expressed regret at his leaving, which was quickly qualified with the biggest BUT television has seen since the last appearance of the Kardashian’s.

Translation: “Sorry, Brian, but you screwed it up for the rest of us, and when it comes to a choice between the two, we choose us.”

When MSNBC’s Rachel Maddow tried to cover the suspension story – straight-up, for a change – she was stonewalled by network brass who refused any on-air comment.

Still, there’s no denying that Brian Williams as a brand has monetary value to NBC, which probably is the underlying and only reason the network didn’t fire him outright. Six months off gives the network time to gather data on whether his misremembrances will result in lasting damage, or will be forgotten when the next circus comes to town.

If the numbers go south for a Brian redux, the network will have had an opportunity to groom a replacement and shore up its foundation for the long haul. Either way, the answer will boil down to bucks, not who he’s buddies with.

How long NBC will really keep him in suspense is unknown. Maybe he’ll end up like former White House chief of staff John Ehrlichman said of F.B.I. director-nominee L. Patrick Gray during the Watergate years, “Well, I think we ought to let him hang there. Let him twist slowly, twist slowly in the wind.”

Given a choice, Brian, maybe a flogging is your best deal.

2 thoughts on “You call that a flogging?”